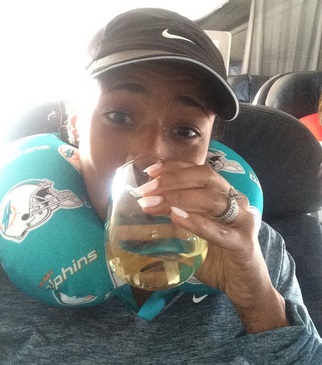 The wife of Miami Dolphins cornerback Brent Grimes went on one of her infamous social media rants during Sunday’s loss to the Indianapolis Colts, and this time it was Ryan Tannehill who felt her wrath.

Miko Grimes is furious with the way the Miami media has covered the team this season, in particular their negative comments about the Dolphins’ defense. Simply put, she thinks Tannehill is to blame for another disappointing season. Miko first said something very unpleasant about Dolphins beat writers Armando Salguero, Adam Beasley and Andrew Abramson. Miko was just getting started on Tannehill.

“I knew this qb stunk the minute we signed to this team but i tried to keep quiet so i didnt discourage bae from believing in his team,” she wrote.

“I shouldve known we were gonna lose when i heard we didnt complete A SINGLE PASS in 2min drills this week against the practice squad defense.”

Unfortunately Grimes doesn’t allow her tweets to be embedded, but you can read more below: We can only imagine how awkward it must be in the locker room for Tannehill and Brent Grimes. Then again, Miko is the same player wife who was arrested before a game (video here) and has no issue unloading on NFL players. The Dolphins have probably come to expect it.