Richard Sherman: ‘I shouldn’t have attacked Michael Crabtree the way I did’ 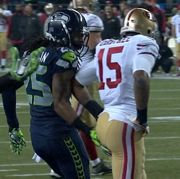 Seattle Seahawks cornerback Richard Sherman expressed regret on Tuesday for his highly-publicized rant after the NFC Championship Game. In another piece he wrote for Monday Morning Quarterback entitled “10 Things I Learned After America Learned About Me,” Sherman started off by saying he should not have verbally attacked Michael Crabtree.

“If I could pass a lesson on to the kids it would be this: Don’t attack anybody,” Sherman wrote. “I shouldn’t have attacked Michael Crabtree the way I did. You don’t have to put anybody else down to make yourself bigger.”

Many felt that John Madden was simply expressing the old-timer’s opinion when he said Sherman’s actions set a bad example for children, but it sounds like Sherman actually agrees. In fact, he admitted the NFL stage is even greater at this level than he could have imagined.

“How much does America love football? My one little rant made it onto CNBC and CNN,” he said. “I heard my name on The View. I got tweets in English, Spanish, French, Italian, Czech and Arabic. People identify with the struggle and the battle of a football game.”

Sherman previously said that calling a person a “thug” is an accepted way of calling them the N-word. Personally, we felt that the 25-year-old simply acted like an A-hole and it was the media that turned the discussion racial. Sherman, however, did not downplay the impact of race on how his rant was perceived.

“Race played a major part in how my behavior was received, but I think it went beyond that. Would the reaction have been the same if I was clean-cut, without the dreadlocks? Maybe if I looked more acceptable in conservative circles, my rant would have been understood as passion. These prejudices still play a factor in our views because it’s human nature to quickly stereotype and label someone. We all have that.”

As I’ve said before, I truly believe that if a white player said the exact same things as Sherman he would be ridiculed just the same. Listen to what he actually said. No one wants to hear players calling themselves the best and taking away from the team. Sherman previously apologized for that, and it certainly seems like he understands that when looking back on his actions.