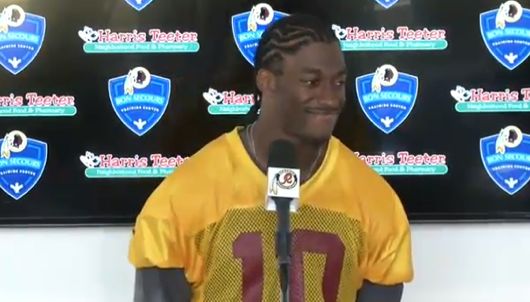 Robert Griffin III returned to the practice field on Friday after he completed the league’s concussion protocol, but you may not have even known he was back out there if you watched the Redskins practice.

That’s because Griffin was reportedly lining up as a defensive back.

According to Jeff Darlington of NFL.com, RG3 ran with Washington’s scout team defense as a safety. Griffin was expected to be the primary backup to Kirk Cousins when he returned, but he is now apparently being used as a third-string quarterback. Colt McCoy will serve as the team’s second-string quarterback.

As Darlington notes, it is not unheard of for teams to have inexperienced quarterbacks line up as defensive backs in practice. It’s a tool that can be used to help players see the field from the other side and better understand coverages.

However, the Redskins have already invested a ton in Griffin, including the $16.2 million option the team picked up for the 2016 season. Typically, teams don’t have first-round draft picks who were supposedly starters less than a month ago line up on the opposite side of the ball. If RG3 suffered an injury while playing safety, his 2016 salary would become guaranteed.

It’s worth noting that Daunte Culpepper filed a grievance against the Miami Dolphins in 2007 in hopes of being traded or released when he was not allowed to participate in team drills. He was successful in forcing his release. The Redskins could be having Griffin run as a safety to avoid a similar situation while not wasting time using him as a quarterback.

Depending on who you ask, the Redskins may be trying to move Griffin. And if RG3 was responsible for this social media activity, he is clearly unhappy with his situation. I doubt having to line up as a defensive back will please him.