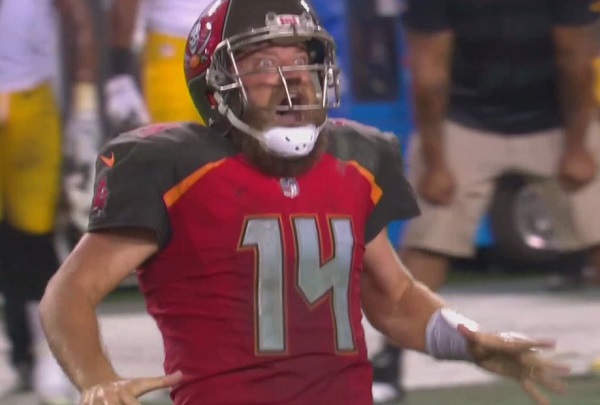 Ryan Fitzpatrick may have had a shaky first half against the Pittsburgh Steelers, but he got sprinkled with some FitzMagic at halftime and came on for the second half.

Fitzpatrick led three straight scoring drives in the second half on Monday night and racked up 411 yards passing in a 30-27 loss. After his touchdown pass to Mike Evans made it 30-27 with under six minutes to go, Fitzpatrick was pumped. The Tampa Bay Buccaneers quarterback had a total freakout, which fans loved.

Take a look at the reactions to Fitzpatrick being all fired up:

I CAN SEE THROUGH TIME pic.twitter.com/Mn4XR0v4F5

When you send the "You up?" text and she responds by asking if you want to drop by pic.twitter.com/zFE4XeUbMX

TFW U NEVER DOUBTED THAT RYAN FITZMAGIC WOULD BECOME THE 1ST QB IN NFL HISTORY TO THROW FOR 400 YDS IN 3 STRAIGHT GAMES pic.twitter.com/tzuYAwumbu

When the shower's too hot pic.twitter.com/LVssvGpfAb

Classic. Fitzpatrick actually became the first quarterback in NFL history to throw for 400 yards in three straight games. There’s no way he won’t be starting in Week 4 even with Jameis Winston back.