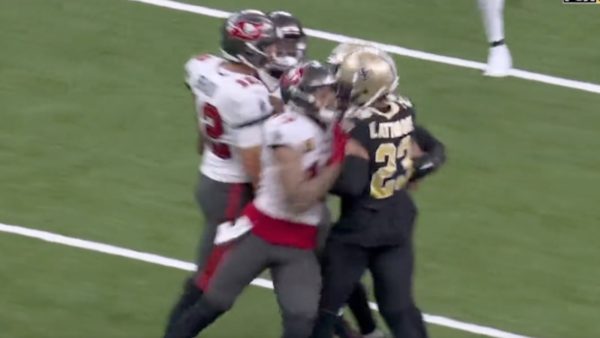 An ugly brawl broke out during the second half of Sunday’s game between the Tampa Bay Buccaneers and New Orleans Saints, and two key players were ejected for their roles.

The fight began after Tom Brady complained about what he felt should have been a pass interference penalty. As Brady was letting the officiating crew hear it, Saints cornerback Marshon Lattimore appeared to say something that the 45-year-old quarterback did not appreciate. Brady then began jawing at Lattimore, and the situation escalated from there.

Leonard Fournette stepped in to stand up for Brady. He and Lattimore exchanged shoves before Mike Evans came flying into the mix and leveled the Saints defensive back. You can see the scrum below:

Even if he was defending his quarterback, Evans’ actions were inexcusable. He should have been more aware of the situation and known that the Bucs were without both Chris Godwin and Julio Jones, who missed Sunday’s game with injuries. That made it even more crucial for Evans to stay on the field.

Of course, it is hardly a surprise that Evans went after Lattimore. The two have a history with one another and have gotten into similar altercations in the past.