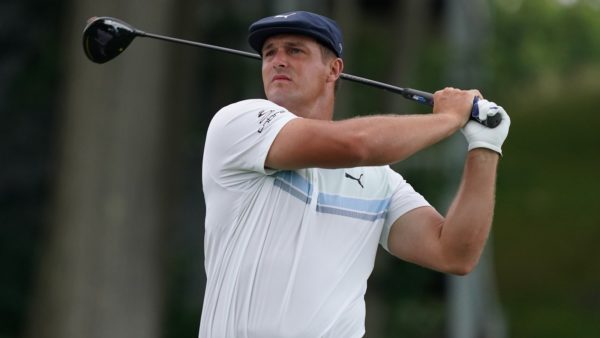 Bryson DeChambeau is enjoying playing in his second LIV Golf event. He is also taking advantage of one big difference between playing in the LIV series vs. the PGA Tour.

Golf Digest reporter Dan Rapaport shared a photo on Wednesday noting that DeChambeau had a full squad of media content people with him on the course. The content recorded by DeChambeau’s team can then be used on the golfer’s social media channels.

Bryson has the full content squad out with him on the course. This was one of the reasons he wanted to go—PGA Tour wouldn’t let him shoot all this stuff inside the ropes. pic.twitter.com/lkDhQavOKj

LIV Golf does not currently have a TV deal and has encouraged DeChambeau to create/share content.

Bryson has the squad out there again today—they said they’ve been *encouraged* by the LIV folks to shoot and share content. This would obviously be different if there was a TV deal…but, as one agent told me: “The answer to basically everything this week has been yes” https://t.co/dyZopOus4E

As Rapaport noted, there are differing circumstances for LIV. LIV Golf is new and looking for all the publicity they can get, which helps explain why they would encourage DeChambeau to create content; that’s free advertising for them. If they had a TV deal, then they would need to work in accordance with their media rights partner, which would likely place limits on what a golfer can do.

Circumstances won’t always allow for someone like DeChambeau to have his full content team follow him around the course. But for now, he’s taking advantage of the circumstances and seems to be very happy doing so.

Interestingly, the restrictions the PGA Tour places on golfers when it comes to owning/creating content is one of the issues that really upset Phil Mickelson.