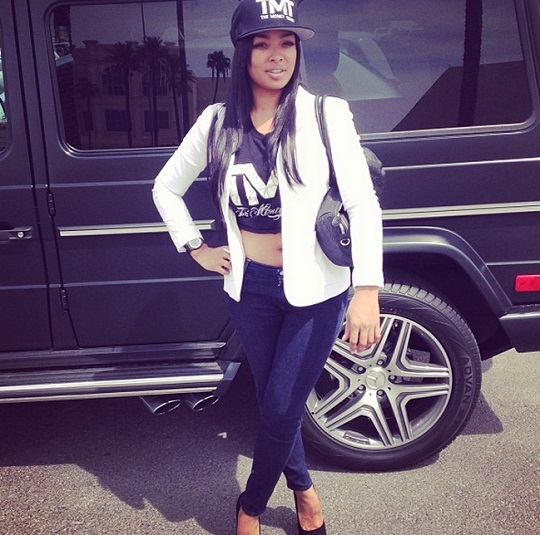 Floyd Mayweather Jr.’s girlfriend on the side may have been cheating on him with music maven and former Kim Kardashian sex tape partner Ray J, of all people, and the affair was exposed by ex-Mayweather pal 50 Cent. Can you believe that?

Mayweatheer and fiancee Shantel Jackson have experienced trouble in their relationship over the past several months, though Floyd told Howard Stern they are still engaged. While they were experiencing problems, Floyd began heavily promoting one of the female members of “The Money Team.” That girl, who goes by “Queen Princess Love” on Instagram (she’s pictured at the top), started posting pictures of all the gifts she was receiving from Floyd. It was clear that Queen Princess Love, who reportedly is a former stripper Floyd met at Spearmint Rhino, had become number one in Floyd’s sidepiece rotation.

But does being a sidepiece mean Queen Princess Love has to be exclusive to Floyd? Yes if you ask him, no if you ask her.

Rapper 50 Cent, who is Floyd’s former best friend, spilled the beans over the past week on Ray J’s relationship with Queen Princess Love.

The first sign of the Ray J-Queen Princess Love relationship came when 50 Cent posted this photo on Instagram: 50 wrote this note along with the picture: @Floydmayweather don’t feel Stupid some of them belong on a TRACK that’s all #smsaudio

So that was the first sign 50 was trying to warn Floyd about Princess. But then he got even more explicit in his next Instagram post, in which he labeled Princess a THOT (That Hoe Over There). “I GOT FLOYD, I GOT RAY J At the same damn Time” was the caption for that one.

50 continued to take aim at Princess in his next Instagram post. This time he took shots at all the photos of gifts she posted that seemed to come from Floyd: Mayweather apparently took note of 50 Cent’s posts exposing Princess for cheating on Floyd with Ray J, and he responded by describing her as trash.

Head over to page 2 of the story to see Floyd’s response.