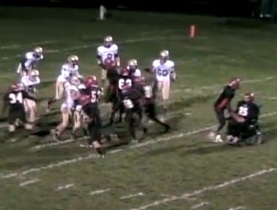 Trent Glaze is a senior at Fairfield Union in Ohio and he’s been using a wheelchair for the last 10 years because he has muscular dystrophy. The young man loves football and has been a manager for the school’s football team the past few years. After attending every team practice and function, he was invited to be on the team this year and serve as team captain.

Glaze’s dream was to participate in a game and that came true on Friday. Moments after his team lost to Teays Valley, both teams remained on the field so that Fairfield Union could run one more play: a handoff to Glaze. The youngster, dressed in full uniform and pads, took the handoff in his wheelchair and scooted into the end zone for a touchdown.

We’ve shown you so many awful stories that took place in high school football games. There have been stories about locker room assaults and players getting arrested during games. It’s nice to balance those out with a heartwarming story like this one.

via Off the Bench