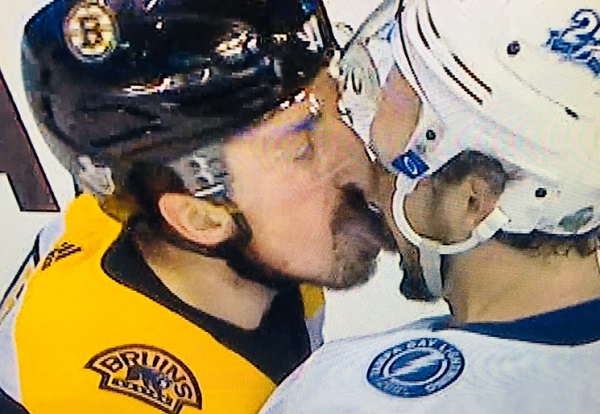 Ryan Callahan is hoping that the NHL will take a look at Brad Marchand’s actions during Game 4 of the Tampa Bay Lightning-Boston Bruins series on Friday.

During the second period of the game, Marchand actually licked Callahan while the two were up close and personal with each other.

Marchand has a history of odd behavior on the ice and actually did the same thing to Leo Komarov in the Bruins’ first round series against Toronto.

Callahan is hoping the play will get attention from the league.

“I hope the league looks at it. I don’t know if there is discipline for spitting in someone’s face. But for me it’s worse, if not the same,” the Lightning winger said after the game, via ESPN’s Emily Kaplan.

Ryan Callahan on being licked by Brad Marchand: “I don’t know what the difference is between that and spitting in someone’s face.”

Lightning coach Jon Cooper was not happy about it either.

Jon Cooper on Marchand’s lick: “All I’m going to say is there’s absolutely no place in the game for that. I don’t understand it.”

We’ll see if the league has some discipline in store for Marchand given his history with this.