The Oakland Raiders are expected to bring back wide receiver Michael Crabtree next season, according to a report.

The Athletic’s Vic Tafur reported on Tuesday night that Crabtree is expected to be back with the Raiders. There was speculation that he could be cut to clear salary cap space given that he was set to make $7.5 million that wasn’t guaranteed.

But despite Crabtree’s issues with the previous coaching staff, Tafur says new Raiders head coach Jon Gruden is ready to give the receiver a fresh start.

Much like the rest of the Raiders’ offense, Crabtree was a disappointment last season. He only caught 58 passes for 618 yards and eight touchdowns. In his first two seasons with the team, he averaged 87 catches for 962 yards and 8.5 touchdowns.

Gruden, who is known as an offensive mind, should be able to bring out the best in Derek Carr, Crabtree, and Amari Cooper. 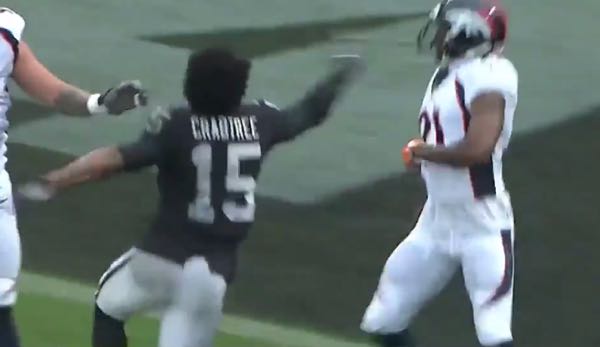 Week 12 saw an abbreviated Sunday schedule on account of the Thanksgiving Day slate of games, but there were still plenty of top performers — and not-so-top performers.

We had some highly-touted players who didn’t live up to expectations, others who were unlucky to have the days they did, some who failed to keep their cool, and some who were targeted by opposing gameplans and simply couldn’t beat them.

Here’s a list of 15 big disappointments from Week 12’s games.

Can we put this man out of his misery yet? Please? Bortles threw for 160 yards, no touchdowns, and one horrible interception that changed the game in the final minutes. Said interception set up the winning Arizona field goal. Bortles is lucky that he has an elite defense behind him, because he certainly hasn’t done anything to put the Jaguars in the playoff race.

This was the first game of Michael Crabtree’s NFL career in which he was held without a single reception. Of course, that wasn’t really all a matter of performance; it was mostly down to the fact that he was ejected in the first quarter of Oakland’s game against the Denver Broncos for fighting with old enemy Aqib Talib. The Raiders won without him, but it was Crabtree who lost his cool and started the altercation. He’s also been accused of sucker-punching another opponent. Whatever his feelings toward Talib, he’s got to be smarter than that.

END_OF_DOCUMENT_TOKEN_TO_BE_REPLACED