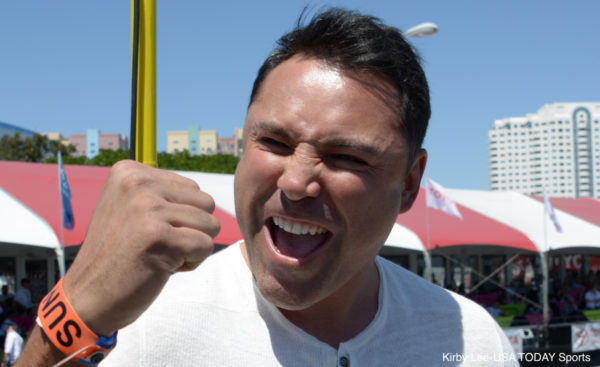 Holly Sonders is serious about her relationship with Oscar De La Hoya and has made that clear through some recent ink.

Sonders got a tattoo on the right side of her upper back about three weeks ago. The tattoo is a portrait of her boyfriend De La Hoya after winning his gold medal at the 1992 Summer Olympics in Barcelona. De La Hoya dropped to a knee in the ring and raised his fist to the sky in honor of his late mother. The tattoo says “Golden Boy” at the bottom, which is De La Hoya’s nickname.

In her Instagram caption, Sonders wrote a public note to her boyfriend.

“You have everything in life. There is nothing I can give you that you haven’t received already…except for this. This tattoo signifies the day you became The Golden Boy. The moment you won the gold medal at the 1992 Olympics and looked up at your mother who had passed a few months prior. When deciding on an artist to bring this moment to life, there was no question that I wanted it to be your sisters husband @tattooesteban. I love you @oscardelahoya,” she wrote.

Sonders confirmed to Larry Brown Sports that the tattoo is 100 percent real, casting aside the doubters who questioned its authenticity. Oscar’s brother-in-law, Esteban Camacho, is the one who tattooed Sonders with the design. He specializes in tattooing portraits.

Sonders told Larry Brown Sports in a message that she narrowed down the photos she was considering to a few images. She says it was Camacho who told her he always wanted to tattoo that particular photo of Oscar, which helped her finalize the decision. Sonders also noted to LBS that next year marks the 30-year anniversary of De La Hoya winning his gold medal in the lightweight division in Barcelona.

Sonders and De La Hoya went public about their relationship over the summer. The two hit it off after Sonders interviewed the boxing promoter in June. Sonders remains well known among sports fans from her past golf coverage on Golf Channel and FOX. De La Hoya, 48, won 11 world titles as a boxer and was set to fight in a celebrity boxing match in September before being forced to withdraw.