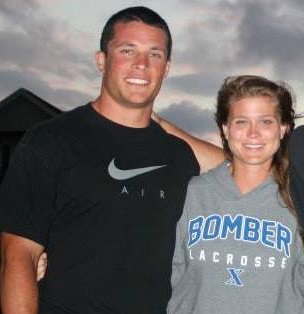 Luke Kuechly has gone from top-10 NFL draft pick to defensive superstar in hardly any time, but he still has managed to keep his personal life and profile relatively low. The same can be said for his girlfriend, Shannon Reilly.

Kuechly, who was the No. 9 overall pick by the Carolina Panthers in 2012 out of Boston College, grew up in Evendale, Ohio. He played high school ball at St. Xavier in Cincinnati, which is where girlfriend Shannon Reilly and her family is from. Kuechly was a stalwart linebacker at St. Xavier, which finished 15-0 his junior year of high school. He went from there to Boston College, where he started as a true freshman. He finished second in the country in tackles as a freshman and led the country as a sophomore and junior. A three-time All-American linebacker, Kuechly left school for the pros following his junior season.

A completely unassuming player, Kuechly has continued to be a stud in the NFL, racking up huge tackling, sack and interception numbers. He’s a three-time first-team All-Pro player and the 2013 defensive player of the year.

But what about his girlfriend? Much like Luke, who has never posted to his own Instagram page and only has sent 26 tweets, Shannon keeps things pretty private. Her Twitter page is on private, and her Facebook profile has most of the information withheld from the public. Previous reports say she had an interest in the medical field. She was said to be studying to be a physician or physician’s assistant. She comes from a large family of six in Cincinnati, and her relationship with Kuechly seems to be intact. Her profile photo is one of her and Luke. One of her brothers also wished Luke well in the Super Bowl. That brother’s profile also features many photos of Kuechly together with the family.

Kuechly keeps it pretty quiet off the field and has a low profile. It makes total sense that he is dating a hometown girl who has the girl next door type of feel.