The University of North Dakota won’t exactly have ideal locker room conditions for their playoff game this coming weekend.

North Dakota finished the regular season 7-4 and travels to Louisiana for a first-round FCS playoff game against 8-4 Nicholls State. When the Fighting Hawks arrive at John L. Guidry Stadium, they will be greeted by a series of temporary tents that will serve as the team’s locker room.

Nicholls State’s football facility is in the midst of a renovation that is expected to be completed by the start of next season. In the meantime, all their opponents this season have had temporary tents as their visitor’s locker room.

“The away team has to stay in tents, so that’ll be a challenge in itself,” North Dakota cornerback Evan Holm told the Grand Forks Herald. “It’s just another big challenge.”

Here’s a look at the setup:

Wow! So this is the visiting locker room, showers and bathroom for the @UCA_Football team. Come on Nicholls, step your game up. pic.twitter.com/dih7IizWzF

Thankfully for North Dakota, as of now, the weather in Thibodaux, La. projects to be around a high of 81 and low of 56 on Saturday.

Austin Rivers had an all-time great troll moment during a game between the Houston Rockets and Los Angeles Clippers.

Late in the fourth quarter of Wednesday’s game, Doc Rivers was involved in a heated exchange with the refrees. That’s when none other than his son Austin motioned for the officials to give his father a technical foul. After the officials T’d up and ejected the elder Rivers, Austin proceeded to troll his father on Doc’s way off the court.

Austin Rivers wanted the refs to give his dad a tech pic.twitter.com/zKRHXf2PYQ

After the game, Austin said his father getting ejected “made his night.”

Austin has had somewhat of a frosty relationship with his father despite playing for him on the Clippers for four seasons. He has said his dad was not around when he was growing up, so that might explain why he enjoyed the moment on Wednesday night.

The next Rivers family gathering should be very interesting — which is exactly what Rivers said in a joke on Twitter.

Welp…. thanksgiving is going to be weird….

Giannis Antetokounmpo was frustrated with his team’s performance during the first half of Sunday’s game and took it out on a blockade.

The Milwaukee Bucks went into the locker room trailing the Oklahoma City Thunder 56-50 at halftime. It seems that half of play didn’t sit well with the Bucks star, who reportedly kicked a hole in this sign at Chesapeake Energy Arena.

Well…apparently Giannis was a little frustrated with how the first half went. He just kicked a hole in this thing in the hallway. pic.twitter.com/h35Vol7Fo3

Perhaps the frustration felt by Antetokounmpo reverberated throughout Milwaukee’s locker room, because they came out and outscored the Thunder 37-24 in the third quarter.

This sort of thing is nothing unusual, as we’ve seen plenty of other star athletes do it in the past. The important thing is to avoid injury while blowing off steam — and to buy a replacement item, which we’re guessing the Bucks will do. Miami Dolphins owner Stephen Ross was in Alabama this weekend to take a look at his potential future franchise quarterback.

On Saturday, LSU and Alabama met in the biggest game to date of this college football season. No. 1 LSU coming away with a 46-41 victory over No. 3 Alabama. The game featured the presumptive frontrunner for this year’s Heisman Trophy in Tigers quarterback Joe Burrow, and last year’s Heisman runner-up Tua Tagovailoa.

Miami entered Sunday with a 1-7 record and likely high draft pick on the way, making good on their plan to tank this season. Ross was one of many on hand at Bryant-Denny Stadium to see both quarterbacks firsthand, according to a report.

Steve Ross joined Chris Grier and two scouts at Alabama-LSU, per WQAM's Joe Rose. Owner also wants to see his potential QB of future in person, whichever one it ends up being

The Dolphins do have a former first-round pick on their roster at quarterback in Josh Rosen, but they’ve mostly been playing veteran Ryan Fitzpatrick instead as the two have alternated benchings.

Ross and the Dolphins are hoping either Tua or Burrow give them their first true franchise quarterback seemingly since Dan Marino retired.

President Donald Trump’s appearance at UFC 244 included boos from fans inside Madison Square Garden as well as protests outside the arena.

Prior to Trump arriving for the event, fans showed up outside of Madison Square Garden holding signs and chanting in protest.

Donald Trump just arrived to protests in NYC at @TheGarden– check out the signs he saw on the way in: #ImpeachAndRemove https://t.co/NGgnZmhHeC pic.twitter.com/vKhhcMSVx4

Once Trump made his way inside, boos accompanied his entrance.

That sound you hear is @realDonaldTrump getting booed at #UFC244 pic.twitter.com/oklkQzGMpk

President Trump getting massively booed as he entered the Garden for #UFC244 pic.twitter.com/ZwmSxlQ4uL

President Trump also received a cold reception when he attended Game 5 of the World Series between the Washington Nationals and Houston Astros.

Stephen Strasburg opts out of contract 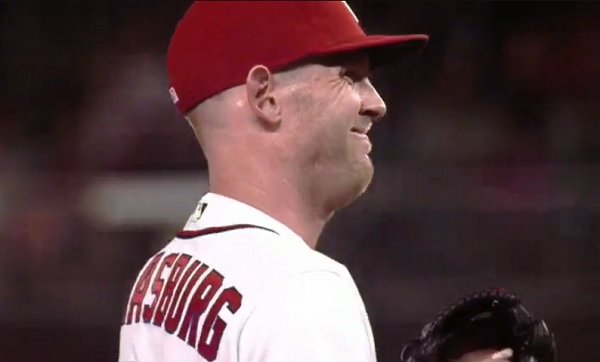 Stephen Strasburg may have thrown his last pitches for the Washington Nationals.

The World Series MVP has an opt-out clause in his contract that allows him to pass up the remaining four years and $100 of his deal in order to become a free agent. According to Mark Feinsand of MLB.com, Strasburg has chosen to exercise the option to terminate his deal.

BREAKING: Stephen Strasburg has opted out of the final four years and $100M of his deal with the Nationals.

Strasburg sheds the final four years and $100M of his contract, though there was $40M in deferred money in the deal, so the present-day value of it was about $88M.

Strasburg had a standout season for the Nationals that saw him lead the National League in wins (18) and innings pitched (209) during the regular season. He then went 5-0 during the postseason, including two wins in the World Series, with a 1.98 ERA on the way to be being named World Series MVP.

The door still remains open that Strasburg can return to the Nationals. However, after his stellar season there is little doubt the 31-year-old right-handed will receive lucrative offers that Washington will have to decide if it is willing to match.