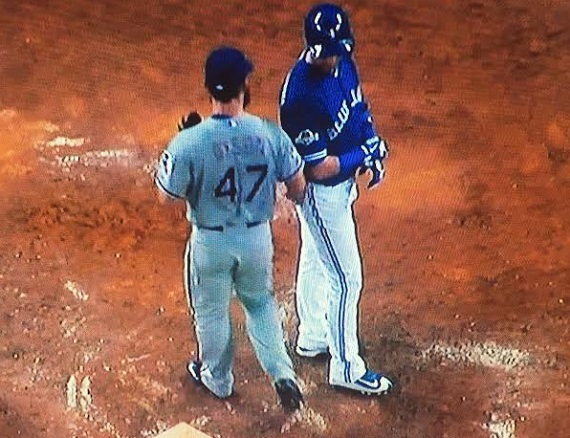 The seventh inning of Game 5 of the ALDS between the Texas Rangers and Toronto Blue Jays will go down as one of the most memorable innings of recent MLB playoff history.

The inning, which took 53 minutes, saw the lead change twice thanks to a controversial play and monstrous home run; a player get ejected; the Rangers commit three defensive errors; and two fights break out.

The first fight occurred when Texas reliever Sam Dyson misinterpreted some gestures by Edwin Encarnacion after Jose Bautista’s home run. Benches cleared, but nothing really happened, and Encarnacion ended up reaching based in his at-bat.

The second fight came after Troy Tulowitzki made the last out of the inning. As he was walking off the field, Dyson brushed by Tulo around the plate and gave him a pat on the rear. Tulo didn’t like Dyson touching him and responded. The two had words, leading to the benches clearing for a second time in the half-inning.

In the end, the Jays left with a 6-3 lead after being down 3-2 entering the bottom of the seventh.