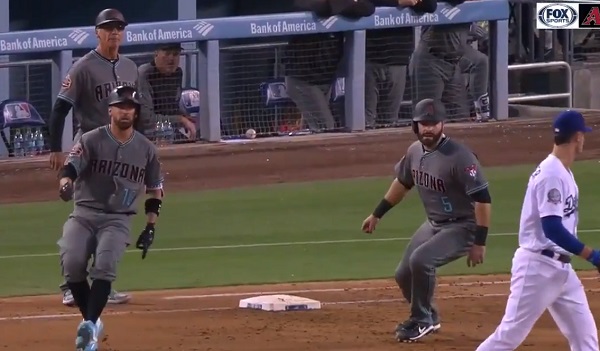 The Arizona Diamondbacks lost a home run on Saturday night due to a ridiculous baserunning blunder.

Deven Marrero was up with two on and one out in the top of the fourth inning against the Los Angeles Dodgers. He drove a pitch to left center that narrowly cleared the wall for what should have been a 3-run home run.

Unfortunately, Alex Avila misread the ball and was going back to first to tag up, thinking it was caught. The result was Marrero passed him around first base.

Deven Marrero clobbers what looks like his first HR with the @Dbacks, but after review is called out for passing Alex Avila on the bases. Marrero is credited with a 2-run single and the #Dbacks lead 5-1 in the fourth. pic.twitter.com/3u1iEvuejn

The Dodgers contested the play and asked for a review. After convening, the umpires decided that Marrero was out for passing the runner in front of him.

Marrero was credited with a two-run single to make it 5-1 Arizona. They won it 9-1, but Marrero was robbed of what would have been his first home run of the season as a result.