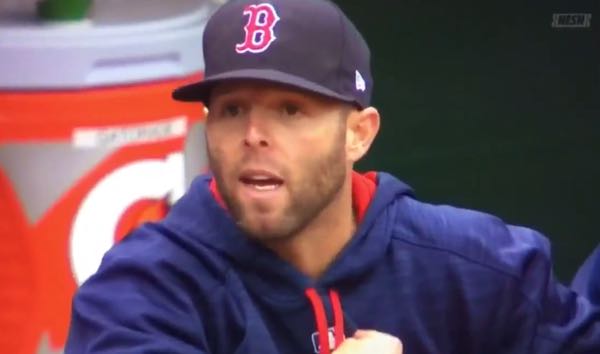 Boston Red Sox second baseman Dustin Pedroia appeared to take the side of Manny Machado on Sunday after one of Pedroia’s teammates seemingly threw at the Baltimore Orioles star intentionally.

In the eighth inning of Sunday’s game, Red Sox reliever Matt Barnes threw a pitch behind Machado and near his head. The ball actually hit Machado’s bat and resulted in a foul ball, but Barnes was ejected anyway. We’ll get to the reason why shortly.

The reason the home plate umpire felt there was intent was that Machado slid spikes-high into Pedroia during Friday night’s game. Pedroia ended up injuring his ankle, and he has missed the last two games as he awaits an MRI. Pedroia clearly wasn’t happy about it. Here’s the play:

Here’s where it gets interesting. Rather than thank Barnes for having his back by throwing at Machado, Pedroia immediately got Machado’s attention from the dugout. You don’t have to be a master lip-reader to figure out that he was telling Machado he did not agree with his teammate’s decision.

As you can see, Pedroia told Machado he thought what Barnes did was “bulls—” and that the Red Sox would have retaliated sooner if it was Pedroia who told them to. Toward the end of the exchange, Pedroia clearly told Machado “that’s not me, that’s them.”

After the game, which Boston won 6-2, Pedroia told reporters he was unhappy with the way Barnes handled himself.

Pedroia said he loves Manny Machado. Very upset that the pitch got near his head. Said that's not the way to handle that situation.

It’s tough to tell if Machado intended to spike Pedroia the way he did on Friday, but it certainly wasn’t as egregious as, say, this slide we saw in the playoffs two years ago. Either way, Pedroia clearly respects Machado enough that he didn’t want someone throwing at the third baseman’s head, nor did he want retaliation coming that long after the initial incident.