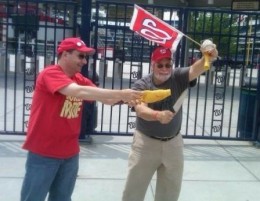 Before the Nationals’ game against the Padres on Tuesday, Washington manager Davey Johnson discussed the team’s injury situation, which has quickly gone from bad to worse. In the span of about 48 hours, the Nationals lost their starting corner outfielders, two catchers, a closer, and the guy who was standing in for the injured closer. If the injury bug exists, Washington has discovered it. Johnson has sarcastically called for the fans’ help in turning things around.

“Sacrifice a chicken or something,” Johnson joked.

As you can see from the photo above that Dan Steinberg of the Washington Post shared with us, a few fans took Johnson’s idea seriously. A small collection of Nats fans gathered outside the stadium on their lunch break Wednesday and chopped the head off a rubber chicken.

“This is the first time we’ve done this,” Nationals fan Hugh Kaufman explained. “I usually sacrifice chickens while we’re having losing streaks.”

Steinberg pointed out that Kaufman said it with a straight face and that he has taken part in a dozen rubber chicken sacrifices since the Nationals came to D.C. With Washington in second place and looking like a contender, the injuries couldn’t have come at a worse time. Hopefully for their sake the sacrifice works better for them than it did for Heath Bell and the Padres.