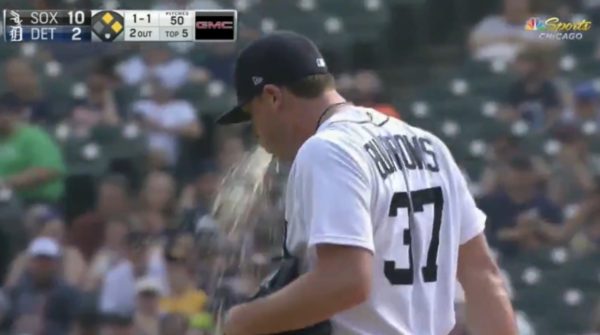 Detroit Tigers relief pitcher Beau Burrows got sick during his season debut on Saturday and threw up on the mound.

Burrows entered in the top of the fourth and pitched a 1-2-3 inning as his Tigers were losing 8-2 to the White Sox. He continued to pitch in the fifth, but things did not go so well.

Burrows allowed the first four batters of the fifth to reach base, with two scoring. Then he struck out two batters before facing Yermin Mercedes for the second time.

Perhaps due to the heat and long inning, Burrows got sick and threw up on the mound.

Tigers Beau Burrows vomits on the mound in his first pitching appearance this season pic.twitter.com/bvwJ1yF2aD

Burrows was a first-round pick in 2015 and made his MLB debut last year. He had just been called up to pitch on Saturday but was sent back down to the minors after the game.

A corresponding roster move will be made prior to tomorrow’s game.