15 best sleepers in the NBA Draft 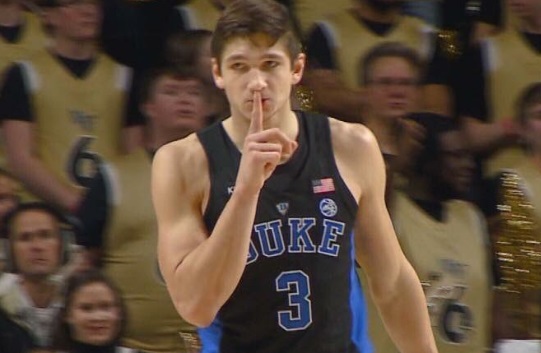 Take a look back at the 2017 NBA Draft and you’ll find a number of slept-on prospects who blossomed in their rookie seasons. Donovan Mitchell fell to No. 13, John Collins to No. 19, and Kyle Kuzma to No. 27.

Teams got lucky in the second round, too. Boston snagged Semi Ojeleye. Golden State traded for the rights to the No. 37 pick, Jordan Bell. Memphis acquired Dillon Brooks.

What a difference a year makes. While the players enumerated above shattered expectations, others who looked like can’t-miss studs last summer now seem destined for a quick exit from the league.

A franchise can make or break its future with a successful draft, and many of the best gems – like Draymond Green and Kawhi Leonard – tend to slip past the lottery. Below are 15 under-the-radar sleepers to whom teams should pay attention.

Metu, 6-foot-11 and 225 pounds, is a stellar athlete. He averaged 1.7 blocks per game in his junior season. His offensive repertoire has expanded, but he’s still a project — he has work to do in that arena. Metu is comfortable handling the rock. Additionally, his free-throw shooting improved greatly over his three collegiate seasons, from 53 percent as a freshman to 73 percent as a junior. Metu has all the physical tools to transform into an imposing defensive force.

Musa just turned 19, but the 6-foot-9 forward has won three straight Croatian league titles. He’s played at Croatia’s highest level since he was 15. Musa has a fiery personality – he will be fun to watch. That fire gets him in trouble sometimes, so he’ll need to learn to control his emotions. Musa also needs to hit the weight room and consume some calories; he weighs only 195 pounds. He is a natural scorer with high basketball IQ.

The 6-foot-4 New York native averaged 13.1 points and 4.8 rebounds per game in his sophomore campaign. He played in the shadow of likely No. 1 overall pick DeAndre Ayton, and Arizona’s season was marred by recruiting controversy and an unceremonious NCAA Tournament exit at the hands of Buffalo. Alkins’ skillset wasn’t on full display this year, but he has potential to break out at the next level.

I’ve been driving the Khyri Thomas hype train this season. He hasn’t gotten much attention because of Creighton’s relatively low competition level, but Thomas’ picture-perfect jumper is a thing of beauty. He shot 41.1 percent from deep this season and averaged 15.1 points and 4.4 rebounds per game. Thomas, 6-foot-4, finishes through contact and has a deft touch at the rim. At 22, he’s a bit older than most prospects, and he was a late bloomer, but Thomas should provide his new NBA team a scoring punch off the bench.

Moe Wagner is both a great Twitter follow and an intriguing draft prospect. The 6-foot-11 junior showed his stuff in the Big Ten Tournament and NCAA Tournament; he’s perhaps the biggest reason Michigan, a No. 3 seed, marched all the way to the national title game. Wagner is a prototypical stretch big. He’s a constant threat to shoot in pick-and-roll situations. Some have speculated that Wagner will struggle against NBA athleticism, but Wagner is a decent athlete himself, and he has the work ethic to carve out an NBA niche.

Allen’s repeated tripping incidents will likely cost him in the draft, but I believe he’ll be a pleasant surprise for whichever suitor takes a chance on him. The 6-foot-4 guard was one of the ACC’s best players in each of his final three collegiate seasons, and he’s an explosive athlete. He’s also a knock-down shooter. Give Allen credit — the 22-year-old was willing to take a backseat as highly touted freshman after highly touted freshman came through Durham. Ego won’t be an issue with Allen, and he’ll be an off-ball offensive threat from the jump.

What is there to say about Brunson that hasn’t already been said? A five-star recruit and the No. 1 point guard in his class, Brunson entered Villanova with high expectations – and he exceeded them. The 2018 Naismith Player of the Year is seemingly every coach’s favorite player. A natural leader, Brunson plays within himself. In leading the Wildcats to the title this season, he averaged 18.9 points and 4.6 assists per game. Brunson was the NCAA’s best player from wire to wire, and he has the grit and mindset to claim a pro roster spot.