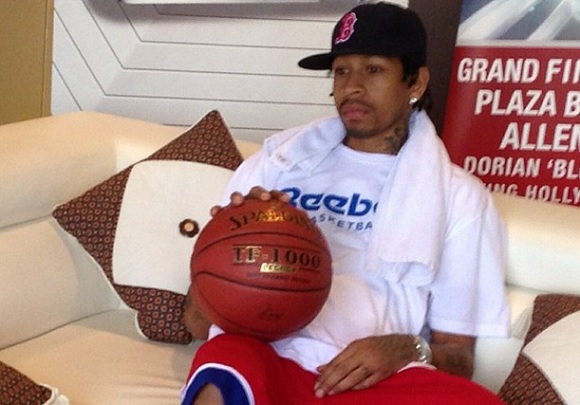 In mid-December, it was revealed that famous musician/actor Ice Cube had tapped into his entrepreneurial spirit and created a summer basketball league.

Named BIG3, the league will feature three-on-three games consisting of retired NBA superstars. The likes of Kenyon Martin, Jason Williams and Jermaine O’Neal have already signed on, but the potential for even bigger names seems endless.

With that in mind, here are five former NBA legends whom we would love to see in the new league.

Tim Duncan initially held this spot, but after giving it additional thought, the switch was made to Kevin Garnett.

Garnett announced his retirement earlier this year after 21 long years in the NBA. At 40 years old, he was the second-oldest player remaining in the league behind Andre Miller, but had still been quite competitive in recent years.

While it may have been time for his exit from the NBA, Garnett’s skills on the basketball court are far from completely diminished. But whether or not he’d want to continue playing is the question.

When he was 37, Garnett wanted to return to college and have it filmed as a Showtime series. In the aftermath of his retirement, he’s still not opposed to that idea. However, the allure of a three-on-three league with several other NBA legends might be more of a draw.

Garnett has long been known for his emotion and ferocity on the court — traits that don’t go away in retirement. Though he’s currently spending time as a contributor to TNT and coaching as a consultant, KG would have a home in the league if he ever wanted to get his competitive juices going again.

It’d certainly be entertaining for the rest of us.

Like many other stars or potential stars, including Greg Oden, who was also considered for this list, Yao Ming had his career cut short entirely too soon. He retired following the 2010-2011 season and was inducted into the Basketball Hall of Fame earlier this year.

Injuries became a crippling issue for the 7-foot-6 international superstar. While his foot problems prevented him from continuing his NBA career, it doesn’t necessarily mean Yao’s playing days are over. At least not once BIG3 officially opens its doors.

Would Ming return to America to play in a three-on-three league? Would such a league even have space for a 36-year-old big man like Ming? Those are certainly valid questions, but if the former is a yes, then the latter most certainly is, too.

Ming was a unique talent the likes of which the NBA had never seen before. He wasn’t just a dominating big man in the middle, but was also capable of knocking down beautiful jump shots with the best of them, while also displaying a soft shooting touch from the line.

At 35 years old, Ming is not so far gone that his big body and large frame couldn’t handle the pounding. And in a three-on-three setting, he’d take even fewer lumps. So while his NBA career may now be a thing of the past, it’s a realistic possibility that he could get some additional basketball mileage out of Ice Cube’s league. And it would certainly help to satisfy the fans who were upset they missed out on seeing Yao in his prime.

The one downside is Yao stays pretty busy as the owner of his former Chinese Basketball Association team, the Shanghai Sharks.

Kobe Bryant finally stepped away from the game after a 20-year career with the Lakers. His final season included a farewell tour capped by a 60-point performance in his last game ever.

Though fans got a good last taste of the Mamba, you know there are many die-hards who can’t get enough of him.

Even after 20 seasons in the NBA, several players and coaches from across the league insist Bryant could still continue playing if he truly wanted to. And the game against the Jazz shows us that the one thing Bean will always be able to do is get buckets.

Kobe is progressing in his career after basketball and promised to attack the business world with the zeal he used in his playing career. He has launched a venture capital firm and is investing in and evaluating multiple businesses.

The Mamba still does some NBA analysis work here and there and has built one of the greatest athlete brands in the past few decades. His fans love him. He’s been known to pop up at local spots like The Drew League in LA here and there, so maybe he would do the same with the BIG3.

Iverson hasn’t played professional basketball since he was with the Turkish Basketball League in 2011, but that’s the point of BIG3 anyway — to give some of these former greats another opportunity.

As recently as 2013, Iverson was fielding offers to play in the NBA D-League, but declined. Later that year, he officially retired from basketball and appeared content heading off into the sunset.

But Iverson has always loved the game. And while he may not be able to keep up with an NBA schedule at the age of 41, playing in a three-on-three league with other retired NBA superstars seems almost ideal for AI. In fact, of all the players on this list, Iverson may be best suited for the league’s structure.

As a quick, shifty and explosive guard, Iverson would provide BIG3 with some legitimate fireworks and an unparalleled attitude on the court.

MJ is the greatest of all-time. He is the GOAT to many. He is a man who has the competitive fire and skills necessary to even compete in the NBA on limited minutes despite being 53 years old.

Mostly focused on turning the Charlotte Hornets into a winner, MJ has long appeared to be superhuman. Video has shown him still giving buckets to his players. In fact, some believe he could still be a force in the league if he ever decided to un-retire and give it a legitimate shot.

“Mike’s still got it,” Chicago Bills swingman Jimmy Butler told ESPN last year. “I’m not going to say that he can get up and down right now, but the guy is the greatest to ever play the game. He loves the game.”

From a marketing standpoint, what would give BIG3 more credibility than having the iconic Jordan as its centerpiece? Of course, getting an NBA owner to join a different league would seem nearly impossible, but why can’t we dream?

Imagine the ratings that would come from a team of Jordan, Jason Williams and Yao Ming against Kevin Garnett, Kobe Bryant and Allen Iverson. It would be thrilling, entertaining and nostalgic. It would be can’t-miss TV for NBA fans of any generation. It would be perfect in every sense of the word.