One Minnesota Timberwolves star paid tribute to the late John Madden this week in unconventional fashion.

Wolves forward Anthony Edwards spoke Friday on the NFL great Madden, who died unexpectedly on Dec. 28 at the age of 85.

“It was sickening, man,” said Edwards of Madden’s death, per Chris Hine of the Star Tribune. “I was playing [the video game] ‘Madden’ when I heard the news. So I had to beat somebody by 30, 40 points to show my respect.”

Edwards is only 20 years old, so he was not around for most of Madden’s broadcasting career, and he definitely was not around for Madden’s head coaching career. But this anecdote shows the incredible reach of Madden, who introduced himself to an entirely new generation of fans by lending his name to and leaving his mark on the popular video game series.

Tributes poured in for Madden around the sports world after his death. But Edwards’ way of paying tribute was definitely a memorable addition too. 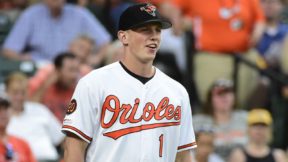