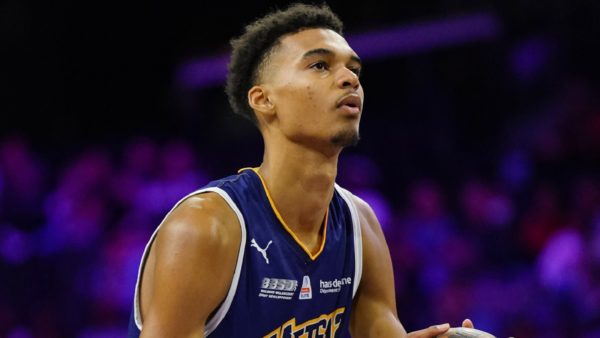 A mind-melting photo went viral on Thursday of the French basketball phenom Wembanyama standing next to countryman Rudy Gobert of the Minnesota Timberwolves. Gobert stands 7-foot-1, but Wembayama was clearly taller side-by-side.

Here is the photo, per Dan Woike of the Los Angeles Times.

Ben Golliver of the Washington Post shared another angle of the meeting between the two behemoths.

Wembanyama, who plays for French professional team Metropolitans 92, is in Las Vegas this week for a pair of exhibition showcases against the G League Ignite. At just 18 years old, Wembanyama is already 7-foot-4 (according to a recent measurement).

Widely expected to go with the No. 1 overall pick in the 2023 NBA Draft, Wembanyama lived up to the hype during this week’s showcases. He flashed a few of his mythical creature-like talents, particularly, his ability to create his own shot, to put the ball on the deck, and to pull up for three … all for a shot-blocker with an eight-foot wingspan (check out some highlights here).

As for Gobert, he will likely be teammates with Wembanyama for France during the 2024 Olympics in Paris. They could also be joined by another larger-than-life NBA center, making for quite the three-headed monster.