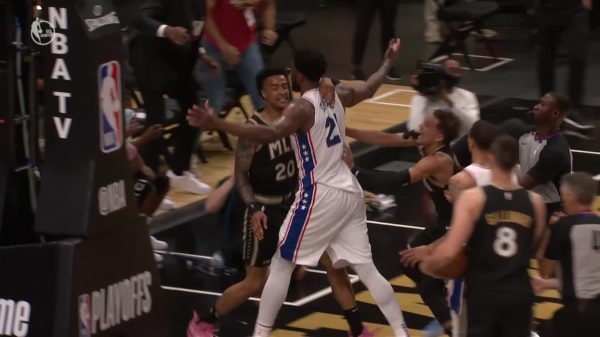 Tensions were running high late in the fourth quarter of Friday’s Game 6 between the Atlanta Hawks and Philadelphia 76ers.

76ers center Joel Embiid drove at Hawks forward John Collins with just over four minutes left in the fourth quarter. Both players fell to the ground, and Collins appeared to shove Embiid as the pair got to their feet. Embiid — with his arms outstretched — then backed Collins behind the basket, prompting a scuffle between both teams that also involved security.

Joel Embiid and John Collins in each other's faces late in the fourth. pic.twitter.com/vJooBJD8Ea

At least one player, backup center Bruno Fernando, was seen leaving the Atlanta bench during the scuffle. If confirmed, that would lead to him being suspended for the Hawks’ next game.

Collins appears to be doing most of the confronting, even as Embiid backed him down. The Sixers center was careful to keep his arms raised as if to demonstrate that he wasn’t doing any punching or shoving. Both players received technical fouls for their role in the altercation, but nothing more.

The series has been heated, and Embiid has even gotten into it a bit with Atlanta fans. A scuffle like this isn’t really a shock in light of that, especially in the waning minutes of Game 6 with Philadelphia’s season on the line.