LaMarcus Aldridge on dislocated finger: ‘It freaked me out’ 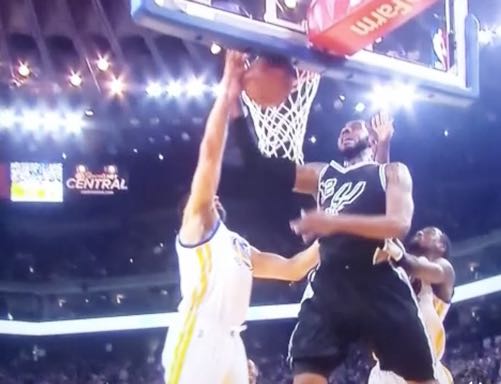 San Antonio Spurs big man LaMarcus Aldridge suffered a pretty nasty injury on Thursday night, and it sounds like it gave him quite the scare.

In the first quarter of a loss to the Golden State Warriors, Aldridge attempted a reverse layup but was rejected by Andrew Bogut. His right hand appeared to smack off the backboard, leaving his pinkie finger dislocated:

Aldridge’s pinkie was left facing in the wrong direction. For those of you with strong stomachs, here’s a photo of the damage:

Aldridge returned to the game after having the finger popped back in by a team trainer, but it came back out as soon as he touched the ball. He said the injury “freaked” him out and his shot never felt right afterword.

“It freaked me out,” he said, via ESPN.com. “I never had it happen to me before. I looked down, and it was going the other direction. So it definitely caught me off guard, and kind of threw me off tonight. It didn’t really feel right the whole night. Every time I shot, it just didn’t feel natural out there. So I was just trying to play through it.”

As you can see, Aldridge wasn’t quite as casual about his dislocated finger as this NFL player was about his.

Spurs fans can only hope the finger feels right by the time the playoffs start. Aldridge will obviously be able to play through it, but it could affect him mentally.