JJ Watt bought his mom a car for her birthday JJ Watt signed a six-year, $100 million contract extension with the Houston Texans last month. That kind of dough should allow the All-Pro defensive end to buy himself a lot of nice things. It also gives him the means by which to thank his mother.

Watt’s mom had a birthday this week, so he decided to buy her a bran new Range Rover.

“I’ve wanted to be able to do this my whole life,” he wrote on Twitter. “For all you’ve worked & sacrificed, you deserve it. Happy B-Day Mom!”

What, no team logo and custom paint job like the car Morris Claiborne bought for his parents?

If you recall, Watt recently said he is such an average Joe that he had to use Google to learn about what rich people buy after he signed his new deal. Fortunately for his mom, it appears that “expensive stuff for your parents” was one of the search results.

Steve Smith: Ron Rivera hid in his office after cutting me In case you haven’t realized, Steve Smith has some issues with the way his 13-year Carolina Panthers career came to an end. On Wednesday, Smith responded a recent report from NFL Network’s Ian Rapoport that indicated the Panthers decided to cut Smith because they were afraid he would be “divisive” in the locker room as they looked to go younger and cheaper at wide receiver.

Smith told WFNZ in Charlotte that reports like the one from Rapoport gave him even more motivation heading into last Sunday’s game against the Panthers.

“To build a case or leak stories that are inaccurate or that I forced something…” Smith said, via WFNZ’s Chris Kroeger. “That’s unfair. I never asked for a release. I wanted to play ball.”

Smith also said that Panthers head coach Ron Rivera never sat down with him before he was released and only texted the 35-year old after the fact to apologize for the way things ended.

He said that the same was true of Panthers general manager Dave Gettleman. Smith said Gettleman told him he is a “shadow” of the player he used to be and that he was jealous of Cam Newton. When Smith asked him if the Panthers were looking for him to take a pay cut, he says Gettleman told him it was nothing about money but that the team was going to trade him. Smith claims he later found out he had been released by listening to the radio.

We’re starting to get a better idea of where all the animosity comes from. Smith went off on the Panthers with a sideline tirade during a game earlier this year and then proceeded to catch two touchdowns against them last weekend. He then made these hilarious comments about his former team while cameras were rolling. Regardless of who is to blame, it’s obvious Smith and the Panthers had a bitter divorce. 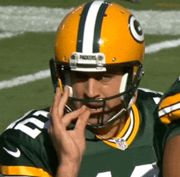 If you have watched the Green Bay Packers in their no-huddle offense at all over the past two seasons, you may have noticed Aaron Rodgers making a smoking gesture with one of his hand signals. It obviously indicates some sort of play call or formation change, but Rodgers wants you to believe he did it on Sunday just for Jay Cutler.

Rodgers is obviously aware of the hilarious ‘Smokin’ Jay Cutler’ meme that hit the internet two years ago and is still going strong. When asked what the smoking signal means during his weekly radio spot on ESPN Wisconsin, Rodgers claimed it was influenced by Cutler.

Cutler and Rodgers are friends, but we know Aaron’s full of crap. Rodgers has been using that hand signal for a while — he just happened to play the Bears last weekend. When pressed further by co-host Jason Wilde, Rodgers tried to say the smoking gesture is just a “dummy” signal.

“It’s a dummy signal,” he said. “That’s the whole thing. You know, like, smoking dope — you’re a dummy if you smoke dope.”

Once again, Rodgers is full of crap. But anything that brings ‘Smokin’ Jay Cutler’ into the spotlight is more than OK with us.

Nothing summed up the Kansas City Royals’ comeback win over the Oakland A’s in extra innings on Tuesday night better than the reaction from George Brett. The game got so tense throughout the comeback that Brett was probably up in his luxury box pooping his pants. Michigan students rallied on campus Tuesday to protest the athletic department’s handling of quarterback Shane Morris, who was sent back into the game Saturday despite showing obvious signs of a concussion.

According to MLive.com, the idea for the rally was started on fan site MGoBlog.com Tuesday morning. The idea culminated with a few hundred students convening on campus in the afternoon to protest the football team’s handling of Morris and subsequent statements by coach Brady Hoke and athletic director Dave Brandon on the matter.

The students called for the athletic director’s head, repeating chants of “Fire Dave Brandon.” They then marched to the home of president Mark Schlissel.

Schilissel issued a statement on Tuesday to express his “extreme disappointment” with the program for mishandling Morris and allowing him to play in his condition. You can see more photos of the march below:

#MichigansPRproblem Students at a rally to protest and seek the removal of University of Michigan A.D. pic.twitter.com/nOb3gAXEka

Detroit Free Press reporter David Jesse covered the rally from start to finish. Below is his account of the events: