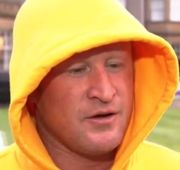 The European team partied its collective face off — and may still be raging — after defeating Team USA to win its third straight Ryder Cup on Sunday. We already know how weird Rory McIlroy got during the celebration, but it sounds like Jamie Donaldson was hammering down the booze just as hard.

On Monday morning, a Sky Sports reporter asked Donaldson if he has allowed it to sink in yet that he is the one who sealed a victory for the Europeans with a 4-and-3 win over Keegan Bradley.

Donaldson then smiled and went on to talk about how the most important thing after a long week was that the team won. He may have been smiling, but I highly doubt he was joking. Lee Westwood wasn’t feeling all that great the next morning, either.

While the Americans lost their eighth Ryder Cup in the last 10 events, they didn’t let the disappointing result completely spoil their fun. Rickie Fowler and Bubba Watson were proof of that.