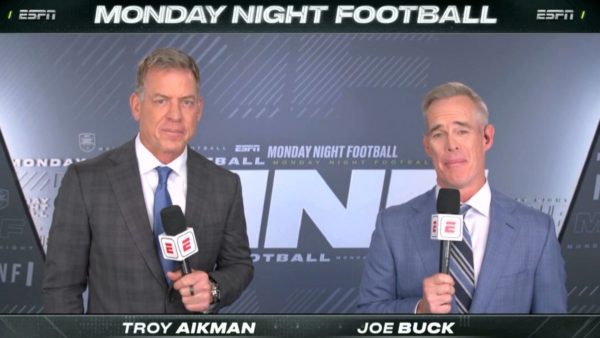 Joe Buck and Troy Aikman are very impressed with one thing Ohio State has been doing.

Olave entered Week 13 with 56 catches for 822 yards. The Saints traded up to draft him No. 11 overall this year.

Not only are Buck and Aikman impressed with Olave, but they believe that Olave’s excellence is part of a trend by the Buckeyes in producing top receivers.

“Oh they are, they really are,” said Aikman. “And they come into the league ready to play. It’s one thing to crank ’em out. It’s another thing when they’re game ready when they hit the field in the NFL.”

In addition to Olave, the Buckeyes produced Garrett Wilson, who was has 57 catches for 790 yards and 4 touchdowns for the Jets. The Jets took Wilson a pick before the Saints grabbed Olave.

The Buckeyes have several other receivers in the NFL currently. Michael Thomas, Terry McLaurin, Curtis Samuel, Parris Campbell and Noah Brown are some of the top Ohio State receivers around the league.

Over the years, Ohio State has produced several other excellent receivers, like Cris Carter, Terry Glenn, David Boston, Joey Galloway and Santonio Holmes. Their tradition is strong and it has not slowed down recently.