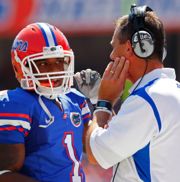 With Urban Meyer having moved on from Florida to become the head coach of Ohio State, it appeared that he has left the Gators without a proven leader and with a team that is heading in the wrong direction. There are some who believe the program is imploding because Meyer left. Others, however, insist the hard times Florida is falling on now are a result of the way Meyer did things while he was in Gainesville.

A Sporting News article that was published on Monday cites a number of former players who say Meyer favored certain superstar players and even protected them from failed drug tests. Former Florida safety Bryan Thomas described the program as having been “out of control.” Other former players referred to Meyer’s “Circle of Trust,” which included the elite players whom he pampered.

Percy Harvin was reportedly at the forefront of Meyer’s inner circle. Several sources told the Sporting News that the former Gators offensive weapon once grabbed receivers coach Billy Gonzales by the neck and threw him to the ground. He reportedly had to be pulled off of Gonzales by two assistant coaches but was never disciplined. Gonzales described the alleged incident as “overblown” while Meyer had the following to say.

“Something did happen and something was handled. I don’t think it’s fair to Percy Harvin or Billy Gonzales to talk about it.”

Former players also say Harvin became frustrated during conditioning drills one day and stopped participating before barking, “This (expletive) ends now.” The next day, they say, the team was playing basketball as its form of conditioning.

While the stories about Meyer having a “Circle of Trust” aren’t exactly beneficial to his public image, Ohio State probably doesn’t care. If you told a major football school that their new coach would favor superstar athletes — which would be appealing to some of the best recruits in the nation — and win two national championships in five years before potentially leaving the program in rough shape, that’s probably a trade-off the school would take. Such is the nature of Division-I college athletics.