Tua Tagovailoa has dislocated hip, fracture and is out for the season 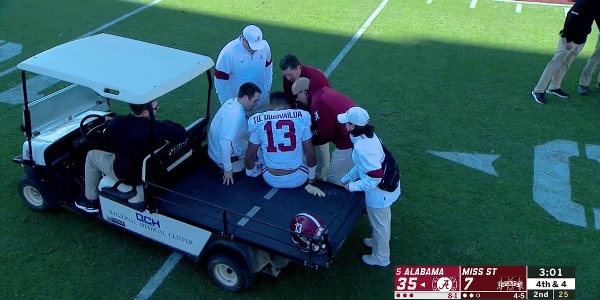 Initial reports indicate that Alabama quarterback Tua Tagovailoa’s hip injury is every bit as severe as it initially looked.

The Athletic’s Aaron Suttles said Saturday that Tagovailoa was out for the season with a dislocated hip and posterior wall fracture.

Breaking News: Tua Tagovailoa is out for the season with a dislocated hip with a posterior wall fracture, a person with knowledge of the situation tells me.

A surgery would raise serious questions about Tagovailoa’s health ahead of next April’s NFL Draft. Comparisons have also been made to the hip injury Bo Jackson suffered that ended his career.

Tagovailoa was screaming in pain on the field as he was carted off due to the injury, indicating that this was clearly more significant than the ankle issue he suffered a few weeks back.

The Chicago Bears made a quarterback change Sunday that will almost certainly remain permanent, but coach Matt Nagy won’t go there yet.
The Bears benched Mitchell Trubisky in the third quarter of Sunday’s game against Atlanta.

The Philadelphia Eagles had to settle for a tie against the Cincinnati Bengals on Sunday, but they are left wondering what could have been because of a costly penalty in overtime.
The Eagles were set to attempt a 59-yard field goal with th