Arkansas fans are missing Bobby Petrino now that the football team is 3-4 without him as the head coach, but at least they’re able to have some laughs about the scandal that cost him his job. Above is a picture of an Arkansas couple who dressed up as Bobby Petrino and his motorcycle mistress, Jessica Dorrell, for a recent Halloween party.

The lady in the picture is Bridgette Walter, and she says she and her husband, Joey, dressed up as Petrino and Dorrell for what is sure to be a Halloween costume trend in Arkansas. They really nailed it perfectly, too.

Bridgette is rocking the blond wig to resemble Dorrell, and Joey has the neck brace, Arkansas hat with a curved bill, and Arkansas pullover like Petrino. The bruised and scraped face just completes the look perfectly.

Walter tells us her husband also dressed up as Petrino last Halloween, and she dressed as a referee to complement him. She says they decided to follow up on the Petrino costume this year.

Here’s what the real Petrino and Dorrell look like for comparison: 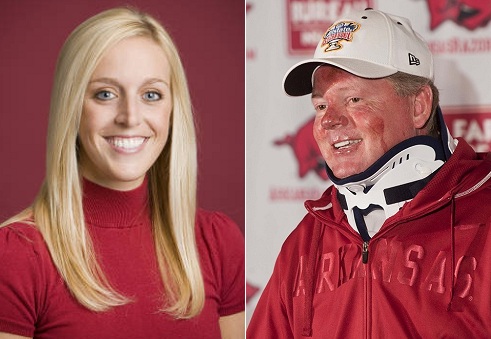 Were they on point or what?

They aren’t the only Arkansas fans wearing Petrino costumes lately: 3-4 is a painful reality for Hog fans.