Colleges With the Weirdest Names … and Strangest Nicknames 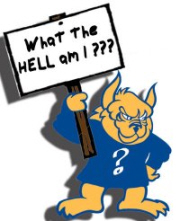 Yeah, sure, it’s all well and good for roses. But, let’s face it, colleges by other names just, well, stink. Have you ever turned on the television during the early part of college basketball season only to find your favorite team playing a school whose name appears to be a mash-up of the cast of M*A*S*H? Well, take solace in that a win is forthcoming if a big name school goes up against Embry-Riddle Aeronautical University. The only riddle to be found in that game would be what the sound of one hand clapping is, though one would be lucky to find even that many in attendance. It could be worse, though. You could find your team facing a bout of indecisiveness when they take on Valley City State. Can’t make up your mind on a name designation? Use all three!

I’m sure Picasso and Van Gogh would have come to blows during a meeting of the Academy of Art University and the Savannah College of Art and Design. Good luck trying to keep the other team out of the paint. Which one will it be? William Jessup? William Jewell? William Penn? Two more and you have a very odd starting five. Hey, I wouldn’t be the one betting against St. Ambrose, St. Francis, St. Joseph, St. Mary or St. Vincent. For good measure, you’ve got Holy Names if you can’t decide among those. If you’re looking for an amicable rivalry, pick up the phone, dial Wichita, and schedule Friends (presuming their fight song wasn’t penned by the Rembrandts). After all, friends don’t let Friends drive to the basket alone. Troll through enough box scores and you may think that you’re reading a blood panel. Viterbo (Wisconsin) and Berea (Kentucky) aren’t too far from another, as is St. Louis College of Pharmacy. Why is it not surprising that Philander Smith College is located in Bill Clinton’s home state?

Hopefully, you are not pouting or shouting during the holiday season because, most likely, (Cal State) Stanislaus is coming town. Slippery Rock sounds dangerous. Johnson C. Smith University sounds more like a command than a team one would expect to be playing. Dream Division II matchup for Seinfeld fans? How about Newman facing St. Leo University? Well, actually there’s something very wrong with THAT. I’d like to see what a Wheeling Jesuit looks like. By chance, is the fraternity housing at Skidmore College called “Skid Row”? South Dakota School of Mines and Technology and Colorado College School of Mines feature a couple of explosive offenses. For those who don’t buy into the whole geographical hype, you can always root for Indiana University (located in Pennsylvania), Northern State (aptly found in South Dakota), and East Central University, which can be found in the southern part of Oklahoma. Also take a trip to Ottawa University and Peru State, which can be conveniently found in Kansas and Nebraska, respectively. And Graceland University is in Lamoni, Iowa and Independence, Missouri. Not sure if the King ever visited.

If you’re bored with the Golden Domers, the NAIA has a Notre Dame College in Ohio and California. Heaven help us if Seton Hill ever makes a trip to Seton Hall, or if West Virginia University Institute of Technology ever pays a visit to the University of Science and Arts of Oklahoma. The names not withstanding, you probably wouldn’t even get a word in edgewise. If Longwood isn’t your cup of tea, try Shorter College (innuendo aside). You’ll find the latter in the Eternal City… Rome, Georgia. Or, if tea isn’t in your cup, maybe Finlandia University could help you out. Bethany Lutheran, Texas Lutheran, Pacific Lutheran, and Wisconsin Lutheran have never won a Division III national championship. If they did, Martin Luther might have to draft another thesis. Given the state of energy levels and technology these days, he might very well just go to Facebook and post it. Teamwork is big at D’Youville College. I wonder if they do the electric boogaloo at Tougaloo College.

The madness doesn’t just stop at the college names. Mascots further the insanity. Sure there are plenty of Bulldogs, Tigers, and Cougars (on and off the field). If you thought the Stanford tree had a little too much of the green stuff, how do you think the Banana Slug feels? You may know that Luke Appling was a Hall of Fame shortstop. Though you, and probably anyone not associated with Oglethorpe University, probably have no clue what the heck kind of a talisman Stormy Petrel makes. Surprisingly, Regis College is the Pride, not the Philbins (get Gelman on the phone!). Division III has a wealth of Scots, but there are also various forms of Cobbers, Gusties, and Tommies. If you are smart enough to figure out how to talk to someone from Rensselaer, perhaps you could ask them what kind of mascot is Puckman and the Redhawk. It sounds like a bad comedy duo.

Drop by Webster University and you may just spot a Gorlok, but don’t ask anyone to admit it. If your school is lucky enough to face the Student Princes of Heidelberg University, expect to see beatings both on the play surface and in the stands. I didn’t know that religious types were so overly aggressive but apparently Division III’s North Carolina Wesleyan College and Ohio Wesleyan University field a slew of Battling Bishops (try playing defense with a mitre on), and Whitman College features Fighting Missionaries (probably a bit too preachy). Things could be worse. If you’re a Long Beach State baseball player, you’re a Dirtbag. If you went to Idaho, you’re presumed to be a Vandal (unfortunately, the only larceny that occurs is when Boise State trounces them on the football field). Maybe athletics aren’t en vogue at Stetson, but the Hatters certainly excel at haberdashery.

With nonconference scrimmaging giving way to seemingly meaningful league games, the little schools recede into the shadows. That means more anger and vitriol. If not for expletives maybe there still is hope for the University of the Incarnate Word.