Adrian Peterson indicted for allegedly beating his son with a switch 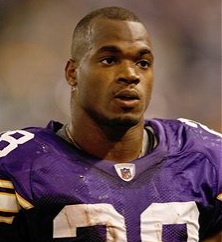 Adrian Peterson has been indicted for reckless or negligent injury to a child after allegedly beating his son with a switch, according to reports. A switch is a part of a tree branch and is often used to discipline a child.

The Minnesota Vikings running back is the charges in Montgomery County, Tex., which is where the Texas native has an offseason home.

TMZ confirms CPS is investigating claims between Peterson and a 4-year-old boy. They also say the alleged victim is from Minnesota and was visiting Peterson at the running back’s home in Texas. TMZ says the mother noticed injuries on the son when he returned home to Minnesota and took the child to the doctor. The doctor reportedly contacted authorities in Texas to report Peterson.

The doctor told investigators that the boy had a number of lacerations on his thighs, along with bruise-like marks on his lower back and buttocks and cuts on his hand.

The police report says the doctor described some of the marks as open wounds and termed it “child abuse.” Another examiner agreed, calling the cuts “extensive.” According to Sports Radio 610’s Nick Wright, Peterson admitted that to “whooping” the child but said it was not an excessive spanking.

A first grand jury investigated the case over the summer and decided not to charge Peterson, but a second grand jury did.

NFL Network’s Ian Rapoport says Peterson testified for a grand jury weeks ago. Peterson missed practice on Thursday but participated with his team’s activities on Friday.

The Vikings are deciding Peterson’s status for Sunday’s game and issued the following statement:

“The Vikings are in the process of gathering information regarding the legal situation involving Adrian Peterson. At this time, we will defer further questions to Adrian’s attorney Rusty Hardin.”

Peterson’s 2-year-old son died last year after being beaten to death in a highly-publicized child abuse case. The mother of one of Peterson’s children says the running back has fathered at least seven kids by at least five different women.

Peterson’s attorney Rusty Hardin, who represented Roger Clemens in his case, had no comment for FOX 26 in Houston, which first reported the news.