While Adrian Peterson mostly received sympathy following the death of his 2-year-old son, there were some who used the moment to expose the truth about the Minnesota Vikings running back’s parenting and family life.

We noted last week that Peterson only recently learned that he was the father of the deceased child. The first time he met the boy was when the child was on life support in the hospital. The man who was initially believed to be the father, Bobby Ruffin, went on Facebook to blast the whole situation. Peterson has since been exposed for having multiple children to multiple women.

According to TMZ, here’s what Ruffin wrote on Facebook about all the sympathy Peterson received.

“So tired of this poor Adrian Peterson sh*t. Let me blow all your minds. The boy who died was my son.

“AP met my son for the first time yest when my son was already in coma. I was here today when we pulled the plug, not him. He was happily practicing and has no problem playing on Sunday.

“So yea this isn’t all out yet but I’m sick of the poor AP sh*t. He didn’t know or even meet my son. Sorry for the outburst but put yourself in my place.”

Most people in the public only knew about Peterson having two children: Adrian Jr. and daughter Adeja. The now deceased son was the third child most learned about.

In a 2009 E:60 profile, Peterson shared that he had two children who lived with their mothers in Texas. He said at the time that his daughter was four years old. 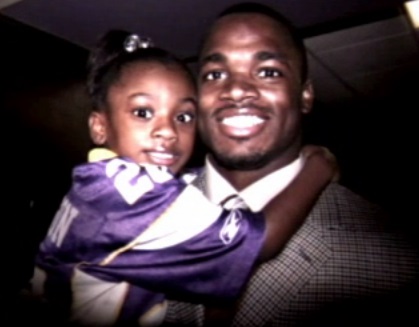 TMZ reported that Peterson had a fourth child most didn’t know about — a 3-month-old daughter living in Minnesota. The mother is said to be a waitress at a popular Minnesota club.

Another woman, Erica Syion, emailed Media Take Out on Tuesday to question Peterson’s parenting and say the running back has multiple children. She says she is the mother of Peterson’s second child and oldest son, a boy named Anthony. That’s five children from five mothers (Erica’s son is likely the second child to whom Peterson was referring in the E:60 profile).

Here’s what Syion wrote to Media Take Out (Syion pictured above):

We all have heard about the unfortunate passing of his youngest little boy he was not familiar with. I’m not going to speak on any of that because that’s not my business but what I am sick and tired of is the media painting this sob story for HIM that he didn’t get a chance to meet his son and poor him.

When Adrian has 5 other children that are alive and well that he picks and chooses which ones he wants to deal with. Showing favoritism.

I have his 2nd child 1st boy so I’m not just talking I live it and know his True character.

This same thing happen in summer 2011 he had 2 children pop up out the wood works that he DID KNOW about but just didn’t tell anyone or bring them around until they were OVER A YEAR OLD and they lived in the same city.

He cheats on his “fiancé” has had 4 other children on her and tries to hide them. Why?! U keep f*cking making them! There’s 6 babies and 6 baby mamas.

Syion mentioned she knew that her son had four half-brothers and sisters. She did not know about the son who died nor the 3-month-old girl. That makes the Peterson’s total children seven.

Syion further exposed Peterson in a series of tweets sent on Monday:

So I'm listen to a few morning shows while in the car this morning and of course they are talking about the loss of Adrian's son. And if he

Was wrong or not to play yesterday. Some say no he dedicated that game to him others say everyone grieves differently some say yes makes

It look like he doesn't care, heard @cthagod say "he didn't even know that kid!" but the kicker is all the sympathy he is getting bc he

Didn't get the chance to meet his son. Adrian has 5 other children that are alive and well. Me having the oldest boy who is 4,is here to say

To speak on the other women's so I'll say with my son he is rarely involved. He has done enough to where my son knows who he is not hands on

Last year he didn't call him on his birthday didn't send him shit. Did that on his 2nd and 4th bday. Didn't even call on Christmas till 10pm

Attorney referral. He never got back to me or asked about the status of his son or situation. Last time he spoke to my child was 2mths ago.

And my son can speak perfectly fine. He has an iPad, tango, Skype, FaceTime,etc…I live in Atlanta so no I don't expect AD to see him often

It cost nothing and no time to call! There's a such thing as being there from afar. He chooses not to! And is fully aware of it bc he has

Said he knows he needs to be better and let him deal with the consequence. I texted him 2weeks ago that my son told his class he didn't have

A dad in circle time when they were discussing mommy and daddies. Another child responds "well you have a nanny so that ok" that's not cool!

Anthony still hasn't heard from him! Is he a phenomenal football player? YES! He is a sorry ass father to SOME of his children.

No different than Antonio Cromarti having all these kids by different women. If u gonna do that since u can afford to

atleast be like Wayne and make time for them all.

I have all the sympathy in the world for this woman Ann and her child she just lost bc not a damn person is thinking about her.

She will have to pick up the peices and be fucked up for life over this loss. Probably can't function and this nigga ain't skip a beat

I've seen ppl saying it's her fault she's a bad mother, I don't know her I can say if she was or not but I do know AD and the type of father

Adrian doesn't ask questions about who his child is around, what's new in school, how are they doing, the concern/interest isn't there.

That's not just with mine that's for a few of them

So Syion says Peterson doesn’t have much interest in his children, but she does say her son spends the summers with AD. In the past, she shared this old photo of her son with Peterson on her Instagram account: Adrian Peterson had seven children by several different mothers, according to Syion. Six are currently living after the death of his 2-year-old son.