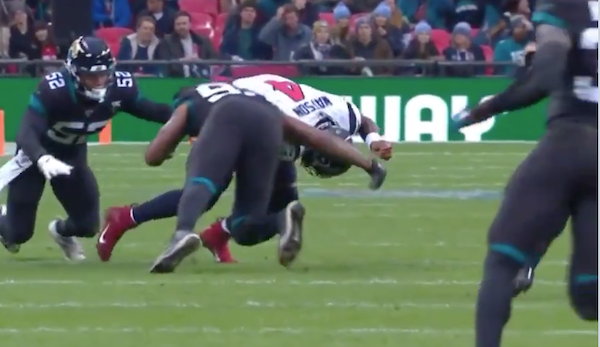 The Jacksonville Jaguars were called for a personal foul at a crucial moment during their game against the Houston Texans on Sunday, and the call was one that simply should not have been made.

Calais Campbell was hit with a 15-yard penalty for lowering his helmet and initiating contact with a runner. In addition to that call being one we rarely see made in the NFL, Campbell was not guilty of it. Replays show that he actually tackled Watson with his arm and did not initiate contact with his helmet at all.

Led with the helmet called on Calais Campbell here.

Come on, what are we even doing? pic.twitter.com/auhjk8tvFw

The penalty gave the Texans a first down in Jacksonville territory, and they ended the drive with a field goal that made it a two-possession game. The officiating crew may have been making a concerted effort to protect Watson because of his nasty eye injury, but that was a terrible call on Campbell. The Jags have every right to be upset about it.