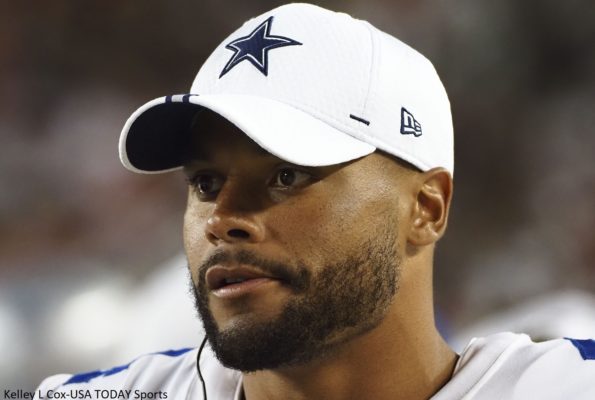 Dak Prescott issued an apology on Tuesday for his comments about NFL officials.

Prescott initially admonished Dallas Cowboys fans for throwing debris onto the field at AT&T Stadium after the team’s playoff loss to the San Francisco 49ers on Sunday. Upon being informed that the fans were throwing things at the refs, who had hurried off the field, Prescott changed his tune and complimented the fans.

On Tuesday, the NBA’s referees tweeted their disappointment with Prescott and asked the NFL to step in.

The NBRA condemns the comments by Dak Prescott condoning violence against game officials. As an NFL leader, he should know better. We encourage the NFL to take action to discourage this deplorable behavior in the future.

“I deeply regret the comments I made regarding the officials after the game on Sunday,” Prescott wrote. “I was caught up in the emotion of a disappointing loss and my words were uncalled for and unfair.

“I hold the NFL Officials in the highest regard and have always respected their professionalism and the difficulty of their jobs.

“The safety of everyone who attends a game or participates on the field of a sporting event is a very serious matter. That was a mistake on my behalf, and I am sorry.”

Not only is Prescott wrong to applaud the fans for throwing things at the refs, but he also was directing his anger at the wrong place. The Cowboys being unable to get off a spike at the end of the game was not because the refs were bad at their job, but because Dallas did their jobs poorly. They should not have called a risky play with only 14 seconds left. And Prescott should have got down earlier and handed the ball to the ref earlier.