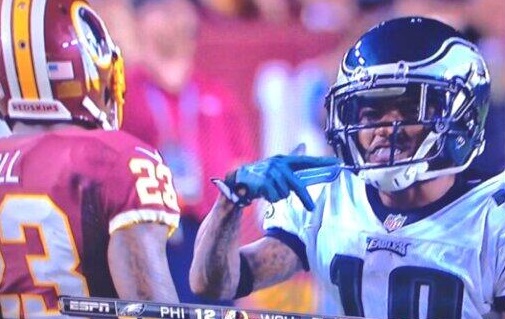 DeSean Jackson put up a monster first half against the Washington Redskins on “Monday Night Football,” and he represented his hometown crew quite well in the game. In fact, Jackson was seen throwing up a Crips gang sign on Redskins defensive back DeAngelo Hall after catching a pass in the second quarter.

Jackson caught a 14-yard pass on 3rd and 8 midway through the second, and Hall was penalized 15 yards for making a horse collar tackle. After getting up, Jackson went right back at Hall and pushed him. The two continued to jaw as they lined up for the next play, which is when Jackson dropped the set on Hall.

Jackson is from Los Angeles and has been repping Crips as long as he’s been in the league. His record label is called Jaccpot, and it’s not misspelled because he’s a dummy; the Cs are for Crips. Jackson also went to Long Beach Poly for high school, which is the same school where Snoop Dogg, another Crips member, attended. In fact, Jackson recently released a song called “Diamonds on my neck” featuring Snoop Dogg. DeSean was seen throwing up the Cs in that music video: So no, Jackson throwing up the hand sign wasn’t an accident. Jackson proudly represents Crips and threw up the sign on national TV. And as our friend Jersey Chaser said, most pro athletes have been Bloods lately (like this guy), so Jackson is switching it up.

Some people are questioning whether Jackson was really throwing his set. Our friend Jersey Chaser speculated that Jackson could be representing the Rolling 60s Neighborhood Crips in LA. In this picture of the Rolling 60s, Jackson is doing the same sign as the guy in the middle: 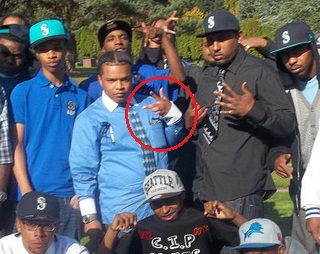 Any coincidence that Jackson wrote on Instagram after the game “#10mode 1-0 to start .. Keep Rollin ..”? I don’t think “keep rollin” was a coincidence.

Below is video of the play in question. You can see Jackson throw up the sign at around the 1:27 mark: