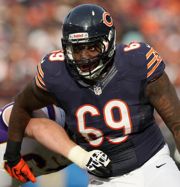 The Detroit Lions are used to be calling dirty on defense by now, and it hardly seems to bother them. Ndamukong Suh has worked hard to earn that reputation with plays like this one, but it’s less common to hear an opponent accuse the Lions of dirty play on offense. According to Bears defensive tackle Henry Melton, Detroit is just an all-around dirty team.

“Dirty. They’re dirty,” Melton said according to the Chicago Tribune. “They’ve always been a dirty team since I’ve been here. I don’t like them. They’re going to be looking for cheap shots and all that mess, just have to hold our composure and play the game we know.

“They just try to do all this extra stuff, talking little cheap shots. If you look at the tape, they’ve always thrown cheap shots, we had a brawl last year. It is what it is, I’m ready.”

Last season, Bears cornerback D.J. Moore threw a hit on Matthew Stafford that started a scuffle between the two teams. The way that fight started doesn’t really support what Melton is saying, but he said the evidence is all on video. He also said Detroit offensive lineman Dominic Raiola is one of the more annoying players he plays against.

“He’s old and he just talks,” Melton said. “He’s more just cuss words, bad language. Then he’ll throw some cheap shots in there and then he’ll say some bad words.”

Accusing an opponent of dirty play is one thing, but I don’t think any Bears players should be complaining about an opponent talking trash with all the ways they have made themselves look bad with their mouths this season. Chicago may still be in the playoff hunt and have a lot to play for this weekend, but the Lions should have no problem motivating themselves to play spoiler against their division rival.