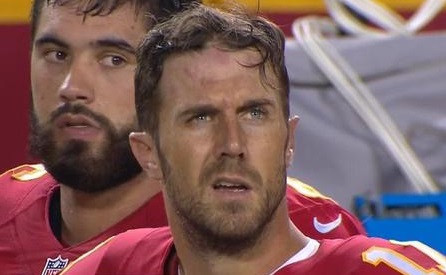 The Kansas City Chiefs put on nothing short of a pitiful performance on national TV against the Green Bay Packers, opening them up criticism from all angles. One of the harshest — and funniest — sources of criticism came from former NFL kicker Lawrence Tynes, who played for the Chiefs from 2004-2006.

Tynes unloaded on KC quarterback Alex Smith, calling him a “check down master” over Twitter:

Throw it down the field check down master it's the end of the half take a shot.

He also called for the Chiefs to put in Chase Daniel instead:

Wouldn't be mad if the @chiefs put @ChaseDaniel in. Dude slings it all over the park. I'm done with the check down master.

Tynes then zinged Smith for his poor performance as QB of the 49ers during the 2011 NFC Championship Game, a 20-17 win for Tynes’ Giants.

The guy completed 1 pass to a WR in our 2012 NFC Championship game. Signing Maclin is like getting a Porsche when you live on a gravel road

Watching the Chiefs and Smith try to operate was embarrassing. Smith almost refused to throw the ball downfield (not exactly new territory for him). When he did, he was picked off. When he didn’t, he was sacked or pressure, or they gained a yard on the ground. Then the embarrassment took a new form at the end of the first half when the team was down by 17 and they refused to take a shot down the field.

Smith’s style of play might work if your team is up two touchdowns and you’re trying to nurse the lead. It’s not exactly a formula for success when you’re trailing the league MVP by three scores on the road.