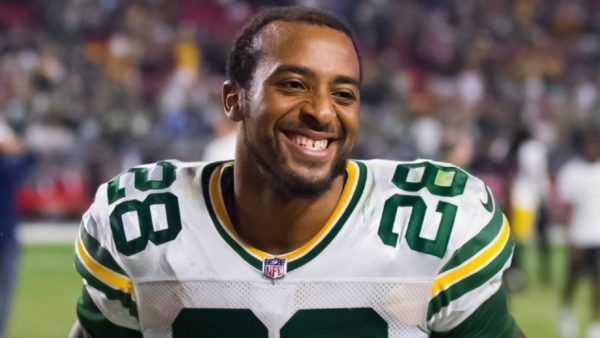 Green Bay Packers running back AJ Dillon had a tense exchange with an officer who was working at Lambeau Field over the weekend, and the Green Bay Police Department says the matter is under review.

Lambeau Field hosted a preseason friendly between Manchester City and Bayern Munich on Saturday, and Dillon was in attendance. The match was delayed by lightning in the first half. During the delay, Dillon hopped down onto the field to hype the fans up. A police officer who was working security came over and yanked Dillon by the back of the shirt and then shoved him to tell him to get back to his seat. You can see the video here.

A spokesperson for the Green Bay Police Department told TMZ on Monday that it is “clear that there was a miscommunication between the Officer and Mr. Dillon.” The matter is being reviewed internally.

Dillon said after the video went viral that two security guards told him he could hop onto the field to do a Lambeau Leap and hype up the fans during the delay. The third-year pro said the incident stemmed from a “miscommunication” and complimented the work that Green Bay Police do.

Just miscommunication between parties, the @GBPolice are great people and I’m glad we have them down there for our games to keep us safe. Standing there in the pouring rain with all those people it’s hard to know what’s going on with just one. All good 🤝🫶🏽 https://t.co/xCKPhoJlWK

The GBPD spokesperson told TMZ that the department “appreciates the perspective and supportive words from Mr. Dillon.”

Dillon did not seem bothered by what happened. That was actually the second time he has gone viral this month for a physical incident. The previous one was a lot more lighthearted, however.