Tom Brady had notable omission in his retirement announcement 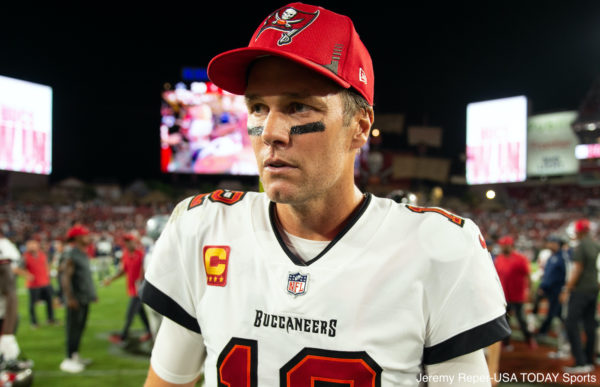 Tom Brady officially announced his retirement from the NFL on Tuesday, and he did so with a lengthy statement on social media. He thanked and mentioned many people and organizations, but there was one notable omission.

Brady made no mention of the New England Patriots or anyone associated with his former team. He thanked Tampa Bay Buccaneers head coach Bruce Arians, his Bucs teammates, Bucs general manager Jason Licht and the Glazer family. He also thanked “every single Bucs staffer and employee.” Brady gave nods to his agents, trainer and best friend Alex Guerrero, the city of Tampa, and his family. There was nothing about the Patriots, Bill Belichick or the Kraft family.

You can scroll through the full statement below:

It was not a coincidence that Brady totally ignored the Patriots. The omission was by design. The question is why. It’s possible that Brady feels he has already said enough about New England. He has had nothing but positive things to say about the team since he left in free agency two years ago. Brady shared several nice tributes to the Patriots after the Bucs traveled to New England to face them earlier this season. He also had a lengthy private meeting with Belichick after the game. Perhaps Brady simply felt now is the time to show appreciation to his most recent team.

The juicier take would be that Brady is angry with the Patriots for not re-signing him two years ago. That seems unlikely, especially given all he has said about them since.

Another possibility is that Brady plans to acknowledge the Patriots again at a later date. Some have even speculated that he could sign a one-day contract to retire as a member of the team, though that seems unlikely.

Brady and Belichick certainly had their differences, but they worked together for 20 years. Brady proved last year that he can win a Super Bowl without Belichick. He almost certainly would not have won six more without the help of the coach. The way Brady and Patriots owner Robert Kraft greeted each other earlier this season made it clear there is no animosity there.

It would be somewhat surprising if Brady mentions nothing about the Patriots in the coming weeks.