Remember last week when we told you that one of Floyd Mayweather’s side girlfriends, Princess Love, was cheating on the boxer with Ray J? And remember how we showed you that Floyd sent a nasty subliminal Instagram message her way in which he likened her to trash? Well it turns out there is much more to the story that explains the falling out.

A connected source tells Larry Brown Sports that one of Mayweather’s homes was robbed the night of his Sept. 14 fight against Canelo Alvarez. Our source says about eight Rolex watches, close to $10,000 cash, and some other items were stolen from the home. Mayweather owns multiple properties in the Las Vegas area, and we’re told the home that was robbed is where Princess Love was staying.

You may recall that Princess said on her Instagram account that she was in Miami in June: 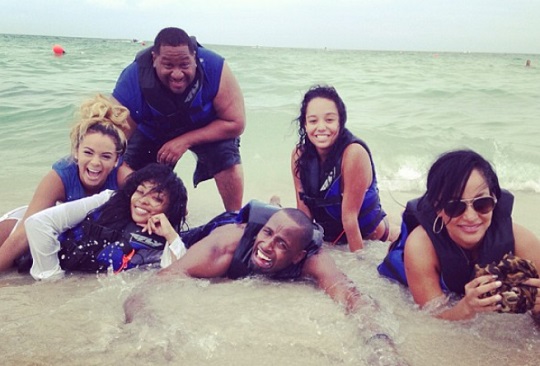 “Love my life and my friends #LIVELaughLove #Miami #BeachDay” she captioned that photo on June 5.

And then there was this photo she shared on Instagram from her Miami trip.

Look familiar? It’s the same suit she was wearing in a photo with her and Ray J.

Keep in mind that Ray J claims to be a part of “The Money Team” and even promoted Princess on his Instagram account back in August.

If Princess Love had the number one spot among all the women on “The Money Team,” why would she be motivated to jeopardize that spot by robbing Floyd? It’s believed that Mayweather puts the women who work with him on contract, and part of the agreement is that the jewelry (and we’re assuming all gifts in general) are returned to him once the relationship ends. That might also explain why 50 Cent termed all the lavish gifts Princess Love shared on Instagram “repo” items.

According to a source, this might not be the first time Princess Love has done something like this. We’re told that years ago, she had a boyfriend who stashed large amounts of cash at her home, and that money went missing.

This is just another reminder that you can never be too careful, especially when you’ve reached the stature of someone like Mayweather.