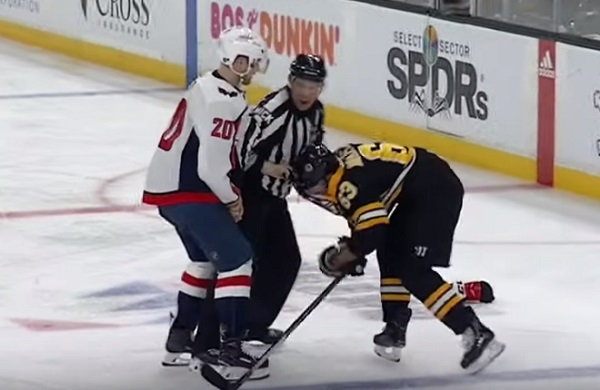 Lars Eller wanted a taste of revenge on Brad Marchand, but the Little Ball of Hate wasn’t interested.

During the second period of Thursday’s game between the Boston Bruins and Washington Capitals, Eller dropped gloves and tried to get Marchand to fight him. Marchand refused.

Lars Eller really wants to go with Brad Marchand but instead all he gets is a penalty pic.twitter.com/uqg3dd5Fs2

Eller ended up taking a penalty due to unsportsmanlike conduct, which the Caps were able to kill as part of their 4-2 win.

Eller was seeking revenge on Marchand, who absolutely pummeled him during a blowout win by the Caps over the Bruins in October. Marchand attacked Eller in that game because he didn’t like the way the Caps center celebrated a goal while up big.

That’s pretty weak of Marchand to go after Eller under those circumstances and then to refuse to engage in what would have been an even fight this time around. Eller said as much after the game.

Lars Eller on Brad Marchand: “Everyone saw what he is. … There’s not a lot of integrity in his game.”

Marchand’s defense for not engaging was that he has nothing to prove.

Brad Marchand on why he didn't fight Lars Eller when challenged: "I haven't looked at the stat sheet, but I really don't feel like I need to prove anything. He plays maybe 10-12 minutes a night and I'm playing 20. In a 1-0 game and to go on a power play, it doesn't make sense"

We think he did. He just refused to.