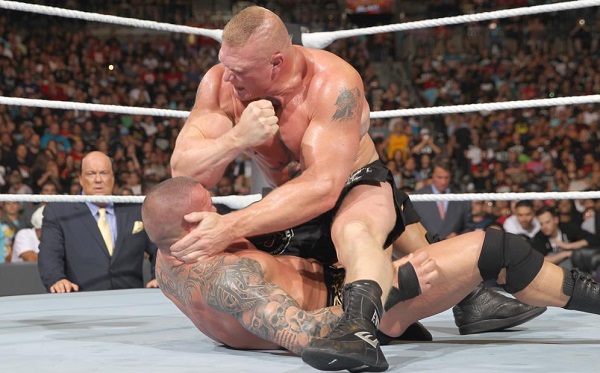 Brock Lesnar is an absolute physical monster. At a lean 6’3″, 286, Lesnar has competed in professional wrestling, football, and MMA. Joe Rogan has posited that Lesnar, if he had started MMA earlier in life, could have been the best heavyweight in UFC history.

After being fined and suspended from the UFC for one year, Lesnar’s return may be imminent. Though he reportedly told the UFC he was retiring earlier this year, rumor has it he may return for another fight by the end of the year.

Paul Heyman and Brock were at the UFC HQ during IFW. Had a meeting with the UFC brass. Brock's return is eminent. Most likely at MSG on Nov4

The speculation is that Lesnar would return for the UFC’s visit to Madison Square Garden in New York City on November 4. It’s a major venue, and Lesnar is a huge star; it would make sense.

Talk MMA stated multiple sources have said Lesnar is back in the USADA testing pool.

I just had a 2nd person tell me that Brock Lesnar is back in the USADA testing pool. Rumor around WWE is Brock is dropping the belt at SS.

Wrestling Observer confirmed Lesnar is back in the testing pool but stated he could not fight until mid-December, per the timing of his suspension.

So, could this really happen? Ariel Helwani says a deal is “not remotely close.” So don’t get your hopes up yet.

Nothing remotely close at this time. They could certainly use him, but not much there right now. https://t.co/qoMvyeqDWL