Tim Krul sure was feeling himself during the Netherlands’ shootout against Costa Rica in the quarterfinals of the World Cup on Saturday.

Krul, who plays goalie for Newcastle, came on as a substitute for Jasper Cillessen after extra time. He allowed the first penalty kick for a goal, but he saved the second and was really feeling confident. He decided to get in the face of Giancarlo Gonzalez and give him a taste of the Mutumbo finger wag prior to his attempt. Gonzalez converted the PK for a goal, though Krul did guess the right direction.

Krul stopped two of the five attempts by Costa Rica, while the Dutch made their first four attempts to get the win.

Krul even did the same thing to Celso Borges prior to his attempt. He called Borges by name and gave him the “I got my eye on you look”: 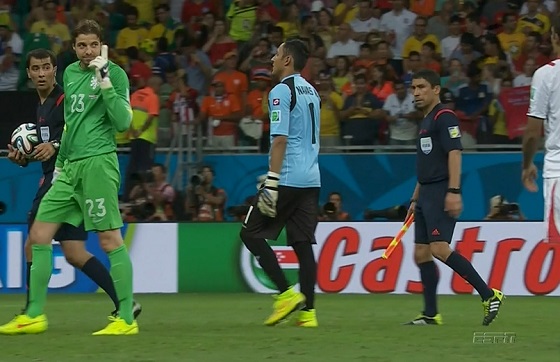 The Netherlands absolutely dominated the match, so it was only right that they won. They had 20 shots on goal compared to just 6 for Costa Rica. Next round against Argentina will be a much tougher challenge.