Corey Davis battled through numerous difficult emotions during the Tennessee Titans’ 34-17 loss to the Indianapolis Colts on Thursday night in Nashville.

Davis’ brother Titus died on Wednesday at the age of 27 due to a rare form of kidney disease. Davis decided to play a day later. He likely had his brother in mind when cameras showed him crying before the game.

Corey Davis lost his brother yesterday who was battling cancer. Davis was emotional on the sidelines before coming out and starting for the @Titans tonight pic.twitter.com/7Ibu4cQMNx

Like Corey, Titus was also a star wide receiver. He played four seasons at Central Michigan and was all conference all four years. He is the Chippewas’ all-time leader in receiving yards (3,700) and touchdown receptions (37).

Corey went to Western Michigan and had 5,278 receiving yards and 52 receiving touchdowns before the Titans made him the No. 5 overall pick in 2017. Corey led the Titans with five catches for 67 yards in the loss.

The top of the 2017 NFL Draft was full of misses The Chicago Bears are declining the fifth-year contract option for quarterback Mitchell Trubisky, which is just another reminder about how the top of the 2017 NFL Draft did not go too well.

As NFL Media’s James Palmer pointed out, only one of the top five picks from that year’s draft had his contract option picked up. None of the picks from 2-5 had their options picked up.

Myles Garrett has delivered for the Cleveland Browns, except for last year’s incident with Mason Rudolph. He has 30.5 sacks in 37 career games for Cleveland.

At No. 2, the Bears took Trubisky, who had a nice season with 24 touchdowns and 12 interceptions in 2018. But Trubisky has shown inconsistency and has seems to be below the level of a franchise quarterback. The Bears added Nick Foles this offseason to compete with him.

The 49ers drafted Solomon Thomas at No. 3. He has 73 tackles and six sacks in 46 career games but has not played like a top-five pick. Though Thomas has not worked out, the 49ers did draft a steal in the 5th round in George Kittle, so they can feel like they still made out well.

The Jaguars took Leonard Fournette at No. 4. He has rushed for 2,631 yards and 17 touchdowns in three seasons but has missed 12 games and has supposedly been a problem in the locker room. He was taken ahead of Christian McCaffrey, Dalvin Cook, and Alvin Kamara, who were three of the next five running backs taken (Joe Mixon was the fourth).

Tennessee thought they were getting a speedster in Corey Davis and didn’t mind his foot injury when they took him at No. 5. He only has six career touchdown catches and has not posted a 1,000-yard season yet. The wide receivers taken high in that draft have not produced well (Mike Williams, John Ross, Zay Jones, Curtis Samuel), while some taken lower have done well, like JuJu Smith-Schuster, Cooper Kupp, Chris Godwin and Kenny Golladay.

The real studs at the top of the draft came with Jamal Adams at No. 6, McCaffrey at No. 8, Patrick Mahomes at No. 10 and Deshaun Watson at No. 12. The 2017 draft wasn’t devoid of talent, you just had teams miss early. END_OF_DOCUMENT_TOKEN_TO_BE_REPLACED

Corey Davis’ first career NFL touchdown was a special one The rookie first-round pick beat Malcolm Butler one-on-one and made a one-handed catch to put the Tennessee Titans on the board in their AFC divisional playoff game against the New England Patriots on Saturday:

Davis missed time during the regular season due to injuries, but he’s coming alive at the right time. That touchdown catch capped a 95-yard drive by the Titans that put them up 7-0 at the end of the first quarter.

There is good and bad news on Corey Davis.

The Tennessee Titans wide receiver left practice on Thursday with a hamstring injury and underwent an MRI. The good news is that Davis does not have a tear and will not need surgery. The bad news is he is expected to miss at least a week, according to coach Mike Mularkey.

Davis was the Titans’ first-round pick out of Western Michigan. The No. 5 overall pick in the draft, Davis was expected to give Marcus Mariota a big weapon this season. 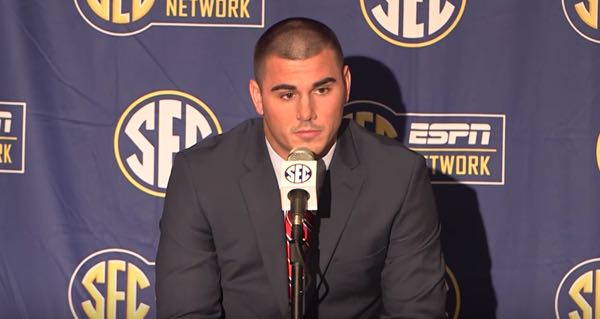 330 NFL hopefuls were invited to Lucas Oil Stadium in Indianapolis, Ind. for the 2017 NFL Combine, which is held through March 6. During their time there, the young prospects will be run through the wringer, fielding questions from professional scouts and putting their athletic skills on display for the football world to see.

For some, the NFL Combine will provide a springboard to the NFL Draft. For others, it very well may harm their projected value. And for even fewer promising rookies, the opportunity to prove their worth won’t even come about.

But just because this event is hyped, don’t forget that there are plenty of athletes who won’t be there, or will be limited while there. Whether it’s because of injury, off-field issues or they simply weren’t invited, a number of good players are not participating in the NFL Combine. Some who will be there will be missing some action.

Here’s a look at 10 of the best players who will be missing the action in Indianapolis.

Unlike most players on this list who won’t participate in the NFL Combine due to injury or who were omitted due to character concerns, Michigan offensive lineman Erik Magnuson simply wasn’t invited.

A first team All-Big Ten Conference honoree in 2016, Magnuson appeared in 45 career games for Michigan, starting 36 of those, including 23 straight at right tackle. And while most experts would agree that there’s not a single standout tackle in the draft, there’s a belief that Magnuson could be an NFL starter for years to come.

The 6-foot-6, 304-pound Magnuson also offers the potential for versatility, having played inside at the guard position as well. And while good numbers at the NFL Combine certainly would have helped his draft stock, he’ll instead have to fall back on his game film and any Pro Days he attends.

At the end of the day, Magnuson will take a hit due to his non-invite to the combine, but should still be considered a solid mid-round option with a lot of upside.