The Washington Commanders are not yet up for sale, but that’s not stopping one group with an interest in purchasing the team from forming.

Last week, we learned that Amazon founder Jeff Bezos and rapper Jay-Z had plans to team up in a bid to buy the Commanders. On Monday night, the New York Post reported that famous actor Matthew McConaughey was planning to be a part of the Bezos/Jay-Z group.

McConaughey, 53, is a Texas native and minority owner of Austin FC, which is an MLS team. He is a longtime Washington Commanders fan and even a friend of current team owner Dan Snyder. McConaughey is also a big supporter of the University of Texas Longhorns athletics.

Even though McConaughey, Bezos and Jay-Z are making plans for a bid, there is no guarantee that Washington will be sold.

The Snyders have only confirmed that they are considering all options related to the franchise. Though it seems like a sale could be the ultimate outcome, that is not guaranteed. If sold, the price for the team would likely be massive and shatter records. 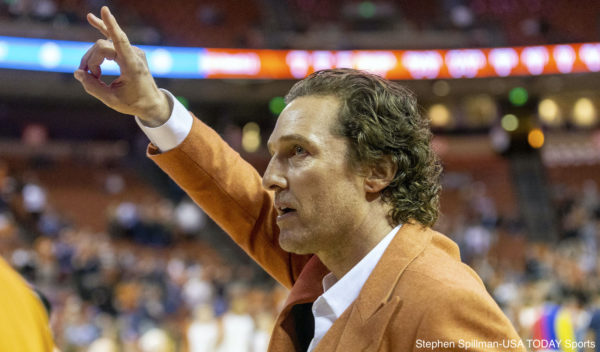 Kansas pulled off the biggest upset in Big 12 football history on Saturday, and their social media team was quick to rise to the occasion.

The Jayhawks defeated Texas in overtime despite being a 31-point underdog. It was their first win ever against Texas in Austin and the biggest point spread upset in Big 12 history. After the game, the official Twitter account of Kansas Athletics took a funny shot at Matthew McConaughey.

You vs the guy they told you not to worry about pic.twitter.com/kGjm4t2KtN

McConaughey is a famous actor and Texas alum. He’s a huge supporter of the Longhorns and often attends football and basketball games. McConaughey is even the school’s “Minister of Culture,” and his duties include pumping up players and fans. He was also quick to welcome Steve Sarkisian when Texas hired him earlier this year.

Rudd, also a famous actor, went to the University of Kansas.

Kansas is getting as much mileage out of the big upset as possible, and who can blame them? Moments like that don’t come along very often.

You’re not an official member of the Texas Longhorns until Matthew McConaughey welcomes you aboard. Steve Sarkisian finally hit that moment on Monday.

Congratulations and welcome to @UTAustin @CoachSark … here’s to building and investing in a future of excellence, let’s rock, #hookem pic.twitter.com/owSfXbRxKu

Thank you!! Great to be part of Longhorn Nation! Time to go to work! #HookEm #AllGasNoBrakes https://t.co/L2K0v2tsUG

McConaughey remains a huge fan of his alma mater. He is even the school’s “Minister of Culture.” Pumping up players on the teams as well as the fans are among his duties. So is welcoming and encouraging new hires to do their best.

Texas is crazy for paying Tom Herman a huge buyout only to replace him with Sarkisian, but Sark will do his best. At least he’ll have the support of the Minister of Culture. Texas defensive lineman Breckyn Hager has much different look thanks to his team’s bowl game victory and some help from a famous Texas alumnus.

Hager’s career at Texas ended with a 28-21 victory over Georgia in this year’s Sugar Bowl. During his time in Austin, Hager’s hair has been something of a talking point since ever since he vowed not to cut it until the Longhorns won the Big 12 Championship.

Unfortunately, Texas didn’t win the conference championship during Hager’s time at the university. However, he still cut his with hair with the help of Texas alum/superfan Matthew McConaughey.

A new beginning indeed for Hager. Not only does he have a new hairdo, but he is about to embark on the next chapter of his life.

McConaughey took out a full-page ad in Sunday’s Austin American-Statesman congratulating the Philadelphia Eagles quarterback, “from one Texan to another.”

Look at this full-page ad in today’s American-Statesman from McConaughey to Nick Foles. @Eagles pic.twitter.com/R54CpGqbMS

Foles probably wouldn’t have expected that, but it’s a cool gesture. Foles is, in fact, a native of Austin, where McConaughey lives. Who would have guessed that the famous actor was following Foles’s progress so closely?

Now the question is whether these two will connect and forge a friendship. If so, Foles can add McConaughey to his somewhat famous list of contacts. Maybe he can get a pep talk before games.