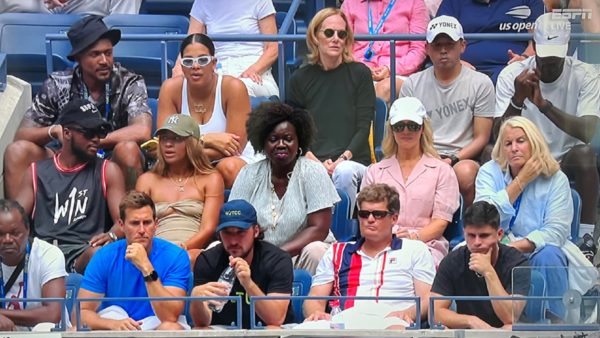 Frances Tiafoe on Friday night was playing in his first major semifinal, and he’s had some VIP supporting him throughout his run at the US Open.

The 24-year-old Maryland native is a big fan of his hometown teams, led by the Washington Wizards. Wizards star Bradley Beal has attended some of Tiafoe’s matches in the player’s private box during the US Open. Tiafoe even shouted out Beal after the emerging star’s upset win over Rafael Nadal.

For his quarterfinal match against Andrey Rublev, Tiafoe had even more basketball players in his box.

In addition to Beal, Denver Nuggets guard Kentavious Caldwell-Pope (formerly of the Wizards) attended. Other basketball players included Alex McLean, who played college ball at Liberty and professionally abroad; and Rob Dosier, a former player at Quincy and current assistant for the Wizards’ G League affiliate.

Bradley and Kamiah Beal, Kentavious and McKenzie Caldwell-Pope, Alex McLean, Rob Dosier, and Kiki Rice back in New York to support Frances Tiafoe in his quarterfinal matchup in the US Open pic.twitter.com/3sBrolVZ6a

Tiafoe’s parents have also been attending his matches. His coach Wayne Ferreira is probably the most focused person of the group in the box.

Prior to his semifinal run at the US Open, Tiafoe’s best major finish was a quarterfinals appearance at the 2019 Australian Open. Entering Friday’s match, Tiafoe had only dropped one set all tournament — to Nadal in the fourth round.