Novak Djokovic had an impressive show of sportsmanship during his second-round match against Radek Stepanek at Wimbledon on Wednesday.

Djokovic had the advantage and was serving to go up 6-5 in the fourth set of their match. Stepanek hit a shot that clipped the baseline, and Djokovic returned it into the net. Stepanek’s shot was called out, so he requested a challenge.

The challenge showed that the ball touched the line and was therefore in, so the chair umpire wanted the two to replay the point. Stepanek thought he should get credit for the point since Djokovic’s return went into the net, but the umpire’s judgment would dictate a full replay since Djokovic’s return could theoretically have been influenced by the out call. 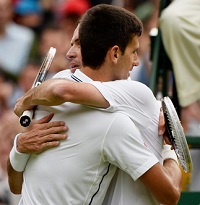 Instead of replaying the point, Djokovic conceded it to Stepanek. Nole went on to win the set 7-6 in a tiebreak to capture the match.

He and Stepanek are good friends off the court and even practiced with each other a week earlier. Stepanek sent this tweet hours after losing:

And thanks to @DjokerNole for being a class act, a true champion and a friend

Their friendship probably was a big reason why Djokovic decided to concede the point. At least he was rewarded for his good sportsmanship.