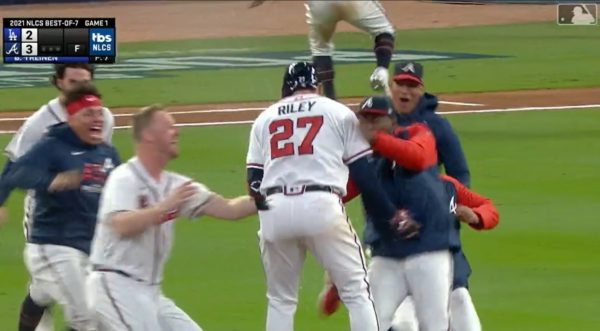 Austin Riley was the hero for the Atlanta Braves in their 3-2 win over the Los Angeles Dodgers in Game 1 of the NLCS on Saturday night in Atlanta.

The Braves scored first, taking a 1-0 lead in the first on a wild pitch by Dodgers opener Corey Knebel. The Dodgers tied the game in the second on an RBI single by Chris Taylor.

The Dodgers thought they were in really good shape after Will Smith hit a tie-breaking solo home run in the top of the fourth to make it 2-1, but the lead did not last long. Riley sent a ball over the left field wall in the bottom half of the inning to tie the game.

The score remained tied until the bottom of the ninth, when Riley knocked in Ozzie Albies with a walk-off hit.

Albies helped make things happen with a huge stolen base after he singled, putting himself in scoring position. He probably would have been able to score from first on Riley’s hit into the corner, but the stolen base left no doubt.

The Dodgers decided to make it a bullpen game and used up eight pitchers. They have been taxed by playing in the wild card game and then going five games in the NLDS against the Giants. Max Fried had a solid start for the Braves, allowing two runs over six innings.

The Braves have taken a big 1-0 lead entering Game 2 on Sunday. The Dodgers will lament getting 10 hits and only being able to push across two runs. Their poor baserunning in the ninth inning will probably stick with them as a major missed opportunity:

A wild end to the top of the 9th! 😱 pic.twitter.com/24ZLeIsoLp

Instead, the Braves got the big win. For Riley, he made his first career walk-off hit really count.