Fred McGriff shared how he ended up in Tom Emanski commercial 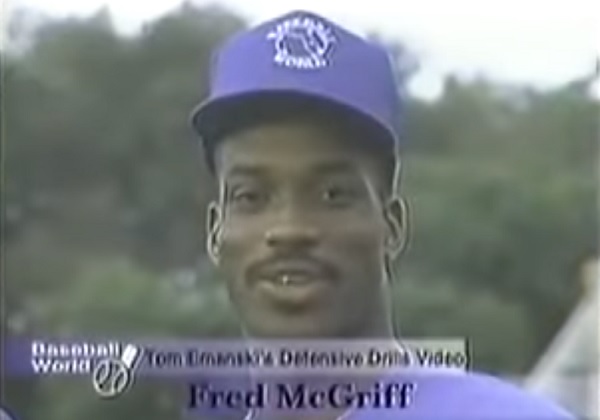 Sports fans who watched ESPN back in the day will no doubt remember the Tom Emanski commercial.

Emanski used to sell baseball instructional videos by buying air time on ESPN. They played every single night. You couldn’t miss them.

Emanski had helped Fred McGriff fix his swing, so when the baseball instructor was ready to make his video, he reached out to McGriff to ask the Crime Dog to appear in the video. The appearance of the five-time All-Star in the commercial gave it credibility and also became part of McGriff’s identity. The former first baseman says he still gets recognized for the video to this day.

Last month, McGriff was in Kansas City as one of five inductees in the Negro League Museum’s “Hall of Game” ceremony. He was asked by Joe Posnanski about the famous Tom Emanski commercial and explained the story behind it.

Oh man, here is Fred McGriff on how the Tom Emanski video happened!

1) Tom fixed Fred's swing when he was a prospect.

“To this day, everywhere I go, ‘what about that Tom Emanski video?’ It’s everywhere!” McGriff said of the video last month.

Here is the famous commercial in case you haven’t seen it or simply want to relive old memories:

Two years ago McGriff made a parody video that you will also enjoy.

If you’re wondering more about Emanski, read this great FOX Sports profile on him from 2014.